The space elevator once a laughed at theory included in future tech in the game Civilizaton is now becoming possible.  First, some artists’ rendering of possible space elevators, then the story. 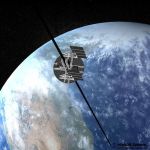 LEARN in Universe and Environment

The Space Elevator Gets a Lift

The fabled elevator to space is a surprisingly pragmatic idea. In November, the Japanese give it a timeline.

Imagine, if you will, a new kind of space travel-one with no launch pads or booster rockets. No risky ocean landings in charred, cramped Soyuz orbital modules; no money-sucking Space Shuttles. No explosions, no “Houston, we have a problem.” Instead of strapping themselves onto the noses of massive rockets and hoping for the best, astronauts would nimbly step into an elevator and ride for a few hours, smoothly and safely, out of the Earth’s atmosphere and into a waiting space station.

Meet the space elevator, probably the most revolutionary idea in the history of aeronautics. Because it’s exactly what it sounds like: an elevator. To space. And, although it’s been a pipe dream of armchair theorists since the 1800s, it just made one giant leap into a whole new world of plausibility. Why? Because the Japanese, perhaps afraid of being eclipsed by the mighty progress of commercial space travel companies, or the showboating of the nascent Chinese space program, have decided to build one, for real.It’s a smart pairing. Japan is a pioneer in the kind of precision engineering that a space elevator requires, and their space program, JAXA, is a small but powerful operation, excelling in X-Ray astronomy, satellite-based Earth observation, and building smart modules and components for the International Space Station. Plunging headlong into this unlikely project, Japanese scientists have founded an organization called the Japan Space Elevator Association, and they plan to host an international conference in November to draw up a timetable for the machine, discuss its impact on the world, and, according to their site, “Organize races with climbers made of Lego Blocks.”Yes, it sounds like fun, but surely this is a folly in a moment of global economic upheaval?
Unbelievably, the space elevator is in fact a totally pragmatic idea, and ultimately a cheap one, too-or rather, it’s cheaper than the fuel-guzzling rigmarole we’re currently faced with every time we need to wrest something from the steely grip of our planet’s escape gravity.The idea is simple, as most good ideas are: a super-strong tether made of carbon nanotubes, held taut by the inertia of the planet’s rotation, spanning from the surface of the Earth to a point beyond geosynchronous orbit, serving as a kind of  22,000 mile-long cosmic freeway (or, as the Japanese have already dubbed it, a bullet train to space) shuttling “lifters” out of the planet’s gravity and into orbit. To boot, the Japanese Space Elevator Association estimates it would only cost a paltry 1 trillion yen (about $9 billion) to build, which is pocket change if you consider the amount of money that NASA has indiscriminately poured into its programs over the years-not to mention compared to a certain Wall Street bailout.
What’s so elegant about the space elevator is that it draws a clean line between our centuries-old conception of “down here” and the newly approachable “up there.” While rockets retain a certain abstract quality-off they blast, in a florid burst of flame and noise, the mechanics of the whole thing still pretty mystical-the space elevator is concrete, as though humankind were reaching its own tentative arm into the great beyond. Besides, rocket fuel is so expensive, and launching rockets such a fuss, that it will probably always keep the democratization of space travel at bay. So what have we been waiting for?
There are a handful of groups in the U.S. working on space elevator policy and components-one being the Liftport Group in Bremerton, Washington-but no one has made plans as bold as those of the Japanese.Building the space elevator involves massive engineering challenges, but they’re not as impossible as they may seem. One of the most stunning things about the elevator, in fact, is that we have all the technology needed to implement it already. The only thing missing is a strong enough material to build the tether-the long cord connecting Earth and Space. Carbon nanotubes, which are the strongest man-made materials on Earth, seem to fit the bill, although the director of the JSEA, Yoshi Aoki, estimates they need to get a little stronger yet: about 180 times the tensile strength of steel.Arthur C. Clarke, perhaps the most ardent and famous promoter of the space elevator, was often asked when he thought the first one might be built. A little flippantly, he noted, “my answer has always been: about 50 years after everyone has stopped laughing.” Stop laughing, everyone: it looks like it might be even sooner than that.