Inside The New Dragon Spacecraft

The Dragon V2 Capsule can carry humans, dock with the ISS, and land on its own.

Although the previous version of the Dragon capsule was flightworthy enough to deliver supplies, its life support system wasn’t reliable for human passengers. Dragon V2, on the other hand, will be able to carry seven astronauts for seven days.

When the capsule reaches the ISS, it will dock with the station autonomously. Unlike its predecessor, it won’t need the ISS’s robotic arm to reach out and grab it.

And this isn’t the only improvement. To land back on Earth, version one slowed its speed with parachutes before splashing into the ocean. This is now a backup technique for the new capsule (because the V2 can use its engines to land propulsively).

“You’ll be able to land anywhere on Earth with the accuracy of a helicopter,” SpaceX CEO Elon Musk announced at the unveiling. “Which is, I think, something that a modern spaceship should be able to do.”

The Dragon V2’s landing ability will make it quickly reusable, an ability Musk hopes will cut the cost of space voyages. “As long as we continue to throw away rockets and spacecraft, we will never have true access to space. It will always be incredibly expensive.”

So how much will reusability reduce prices? According to Ars Technica, NASA pays Russia about $71 million per astronaut for trips to the ISS. Musk thinks he can drop that number to $20 million or less.

Thought-controlled planes are in our future

Thought-controlled planes are in our future

Why pilot a plane with your hands and feet when you can do it with your brain? Thought-controlled flight could be arriving soon, according to the EU-funded “BrainFlight” project.

A team of scientists from the Institute for Flight System Dynamics and the Berlin Institute of Technology says it has translated brain impulses into control commands, enabling pilots in a plane simulator to achieve a range of remarkably precise maneuvers without touching the controls or pedals.

Wearing a cap with lots of cables attached, pilots in the simulator were able to land a plane simply by looking at the screen and moving the control stick with their thoughts, correcting the plane’s position repeatedly until it landed.

To achieve the breakthrough, the researchers connected electroencephalography (EEG) electrodes to a cap to measure the pilot’s brain waves. An algorithm created by Berlin Institute of Technology scientists enabled a program to decipher the brain waves and convert them into commands fed into the plane’s control system.

Once it’s perfected, brain-controlled flight could reduce pilot workload and increase safety. Freeing up pilots’ hands would give them freedom of movement to manage other manual tasks in the cockpit.

The German team conducted its experiment using seven test subjects with a range of flight experience, including one who had no experience whatsoever.

The team reported that all seven, flying the plane only with their thoughts, managed to achieve accuracy that would meet some flying license requirements. Astonishingly, even the participants with little or no prior training succeeded in landing the planes.

One participant was able to follow eight out of 10 target headings with only an incredibly small 10-degree deviation. Another was able to land within only a few meters of the runway’s center line.

Some even managed their approach in poor visibility conditions.

Imagine what trained military pilots might be able to do with this technology.

In 2010, British researchers revealed that fighter pilots, despite being more sensitive to irrelevant and distracting information, have significantly greater accuracy on cognitive tasks. When scientists looked at MRI scans, they found that pilots have a white matter microstructure in the right hemisphere of their brains that is different from non-pilots’.

The German team’s achievement isn’t the first of its kind.

Last year, a team from the University of Minnesota announced that it had flown a model helicopter through an obstacle course using thought alone. As in the German system, electrodes were attached to the pilot’s scalp, and his brain waves were used to guide the aircraft.

Creating a mental image altered brain activity in the motor cortex, which was recorded by the electrodes. A computer program deciphered the signals and translated the pilot’s intent.

To move the helicopter in a particular direction, a user imagined clenching his or her hands. To go left, for example, the pilot pictured clenching the left hand. To go up, he clenched both hands.

Ultimately, the developers of the mind-controlled helicopter hope to adapt their technology to direct artificial limbs and other medical devices.

In another example, in 2010, a team at the University of Illinois at Urbana-Champaign announced it had flown an unmanned aircraft at a fixed altitude with the ability to adjust headings in response to the pilot’s thoughts.

What’s next?
The TU München scientists are now researching how control systems and flight dynamics must be altered to accommodate brain control.

For example, pilots flying with their hands feel resistance in steering. But this sort of feedback doesn’t happen in brain-controlled flying.

The next step is to find ways to provide this sort of critical feedback without physical contact.

Cosplay Pictures for Your Saturday Fun!

Cosplay Pictures for Your Saturday Fun!

Me with Cara Nicole

After hours at a Con 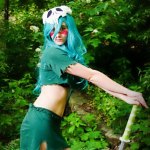 Random Humor for your Friday

What does the fox say?

Technically, the I is white…

McDonalds, the sponsor of runners…

Amanda
1800-1899,
The September 27, 1888, wedding of Margaret Buckley and Edward T. Davis was held at the Rhode Island State Fair at Narrangansett Park in Providence. An article in Frank Leslie’s Illustrated Newspaper estimates that 40,000 watched as Davis and Buckley entered the “specially prepared ‘bridal car’ of the mammoth balloon Commonwealth, held down by 24 men at the guy ropes.”  After the ceremony, aeronauts James Allen and his son James K. directed the balloon skyward.At dusk, the balloon landed in a swamp near Easton, Massachusetts, about thirty miles away from Providence.  The wedding party was “obliged to cling to the ropes above the basket to keep out of the water.”  Finally rescued, the balloon tied safely to a tree, the couple completed their trip by rail.  Afterwards, Allen and the Davises reenacted their wedding for a photographer in a studio.

Actually, they’re playgrounds from the former Soviet Union, where people were good at making a lot of things — tanks, rifles, factories to make tanks and rifles — but cheerful playground statuary clearly wasn’t one of them. The following playgrounds give me nightmares as an adult; I can’t imagine the many ways they might warp the imaginations of children.

Perhaps this play sculpture from Moscow is meant to impart a lesson: never crawl into a hungry dragon’s mouth.

END_OF_DOCUMENT_TOKEN_TO_BE_REPLACED

Cute Dogs for the Start of Your Week

Here in the United States most of us had yesterday as Memorial Day Holiday.  As a result, my cute dogs for a Monday was delayed until today.  Enjoy!

Dogs looking through a fence 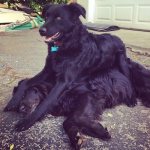 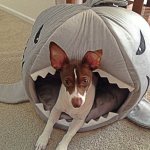 Chillin on the couch