Hopefully, some fun for your day.  Enjoy!

Poor Japanese have all the big monsters

They bent the tips over…

It’s a big ad and they cannot lie.

No likes or shares…

Now we know why we can’t find bigfoot

Ex-boss when he sees that. 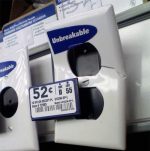 Just imagine the events that led to needing this sign

We monitor crime, then run away clucking

Probably more accurate than Board

Not sure if bad translation or stupid name

For the cake of those with a strange accent

The link below has 106 examples of amazing outdoor, or “secret” art.  I always find these very cool, hopefully you will as well.  First, a brief sample of what to expect:

Love this one too.

Good 3d view on side of flat building

Really pops out at you.

Half expect a huge tongue to lash out

Hard to realize that is the flat side of a building.

Climbing the Self Improvement Hierarchy

A picture with goats, or as it calls them, gotes.  From StumbleUpon via viruscomix.com

You will probably have to click on it to see it all. 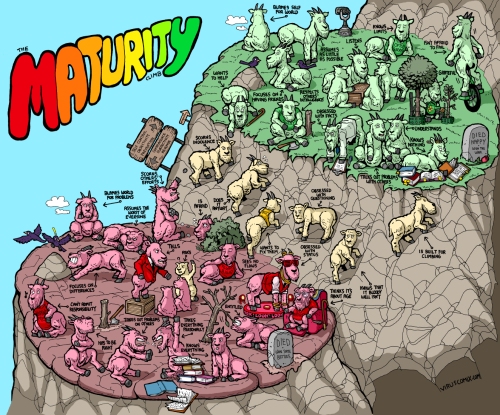 Reposted via The Chive via Tapiture

Crazy inventions from a time long, long ago (27 Photos)

I managed to scrounge up some pictures, having lost my thousands on file when the disk malfunctioned…  Enjoy! 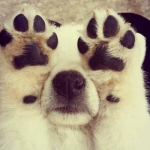 I lost seven thousand pictures today.  All my cute dogs, cosplayers, steampunk airship crew, and steampunk, and other categories.  I get so many I store them on disks with cut and paste.  Well, I cut and it said it pasted, but the disk is corrupt and won’t read.  It shows zero files…  Have to start over with those.  Don’t worry, it does not take me long to stock up, and I still have around 10,000 pictures in other categories… 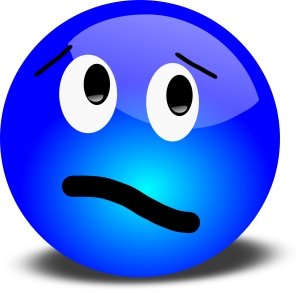 30 Things to Start Doing for Yourself

Reposted from marcandangel.com via Stumbleupon.  The site Marc and Angel Hack Life looks pretty interesting to me.  I found this advice good to live by.

30 Things to Start Doing for Yourself

Remember today, for it is the beginning.
Today marks the start of a brave new future.

Our previous article, 30 Things to Stop Doing to Yourself, was well received by most of our readers, but several of you suggested that we follow it up with a list of things to start doing.  In one reader’s words, “I would love to see you revisit each of these 30 principles, but instead of presenting us with a ‘to-don’t’ list, present us with a ‘to-do’ list that we all can start working on today, together.”  Some folks, such as readers Danny Head and Satori Agape, actually took it one step further and emailed us their own revised ‘to-do’ versions of the list.

So I sat down last night with our original article and the two reader’s revisions as a guide, and a couple hours later finalized a new list of 30 things; which ended up being, I think, a perfect complement to the original.

Here it is, a positive ‘to-do’ list for the upcoming year – 30 things to start doing for yourself:

James Bond Alphabet – Can You Get Them All? 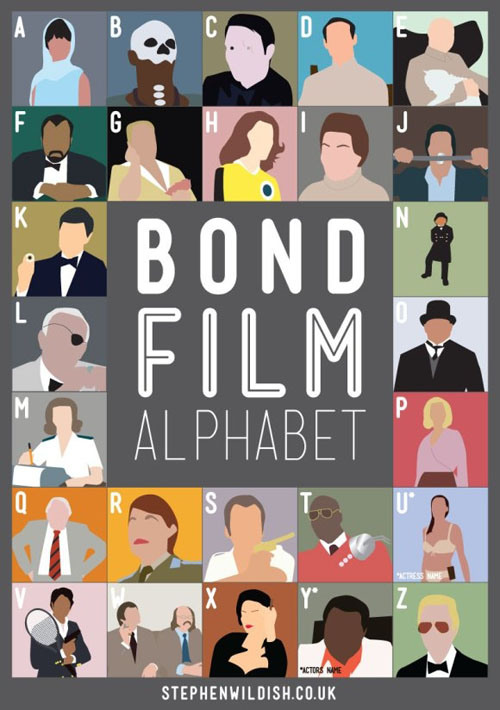 Oblivion is the latest Tom Cruise science fiction movie.  I have never really cared for Tom Cruise or his acting, and special effects tend to be overdone in his movies, so that was my expectation entering the dark expanse of the theater.  I was in for a refreshing surprise.  Yes, there is Tom Cruise strutting, shirt off, close ups of his face as in all his films, and there are special effects full of eye candy, but there is also a fascinating sci-fi story as well.  This makes Oblivion definitely worth seeing.

The role of Jack Harper is portrayed by Tom Cruise, who gets nearly all the screen time as well.  Andrea Riseborough, an English actor portrays Victoria and does an outstanding job.  Olga Kurylenko, the Ukraine born woman who played the Bond Girl in Quantum of Solace, plays Julia.  Morgan Freeman, as always, plays himself, but the character is named Beech.  They are the only four with significant airtime. 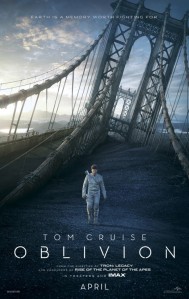 The story starts out with flashbacks and narration by Jack Harper that let you as an audience know that aliens called Scavengers, or Scavs, for short, attacked the planet.  Earth won but was destroyed, so the people went off to Titan, but they have to harvest the seas for energy.  Jack and Victoria are left behind to fix the patrol drones and keep the harvesters safe from the remaining Scavs who are bent on causing them troubles.

I hate the fact that movie trailers reveal too much.  I have to confess that the first couple of “twists” in the story I had already guessed from the trailers.  It is impossible not to see them in this mass media world we live in where they spend almost as much marketing as they do filming.  Still, the movie takes several turns and some were not expected at all.  The movie moves along at a good pace, revealing things one at a time, not making you wait to long, but having you reassess what is going on along the way.

A few caught me unawares, which is what I really enjoy.  Oblivion is not a movie that you will talk about for weeks.  It has no deeper meaning to it.  However, it is a refreshing bit of eye candy, action film, that is not mindless, but actually tells an interesting tale as it goes and you use your mind a bit to keep up.  I would like to comment on a few things that did not work as well, but I won’t.  They would require spoilers, and I won’t duplicate a movie trailer by giving too much away. 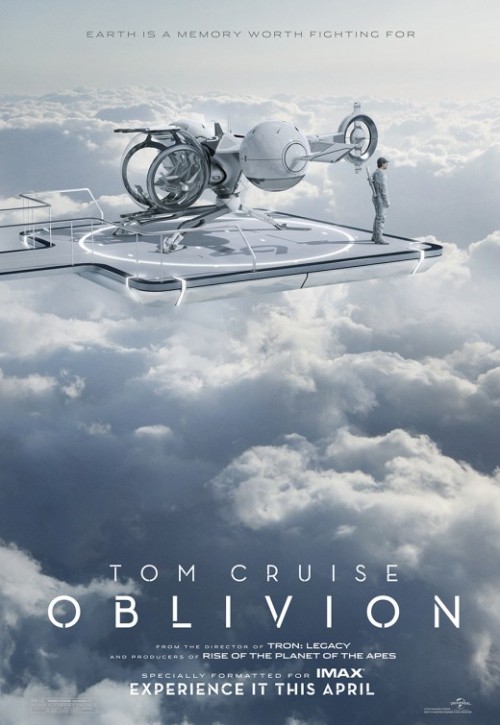 Death of a Dentist

Have you ever wondered about Doc Holliday, the gambler and gunfighter, with the Earps at the OK Corral?  When I was younger I did a lot of research, wondering why he was called “Doc.”  You see he was a dentist.  Now, why would a dentist with a thriving business back east move to Arizona to play cards and shoot people?  Most think it was because of his tuberculosis, which would be partially right, but don’t realize that he got his TB because of his profession… 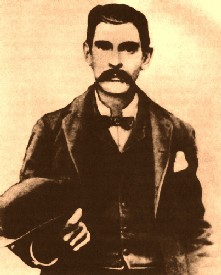 Dr. John M. Harris started the world’s first dental school in Bainbridge, Ohio, and helped to establish dentistry as a health profession. It opened on 21 February 1828, and today is a dental museum.[3] The first dental college, Baltimore College of Dental Surgery, opened in Baltimore, Maryland, USA in 1840. Philadelphia Dental College was founded in 1863 and is the second in the United States. In 1907 Temple University accepted a bid to incorporate the school. 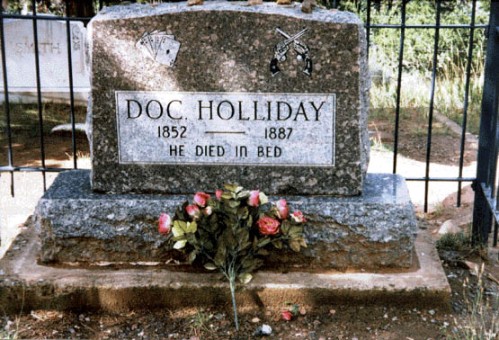 Doc Holliday died at just age 35, very young for a man to die.  Although life expectancy was low, it was mainly due to high infant mortality.  Once you matured to adulthood, you could expect to live into your sixties or seventies.  However, Doc Holliday had the riskiest career in America – not gunslinger – that was tame in comparison.  He was a dentist!  You see dentists were able to make a living in large cities, primarily in the eastern United States.  Those were all large, crowded, unsanitary locations with thousands of foreign immigrants. 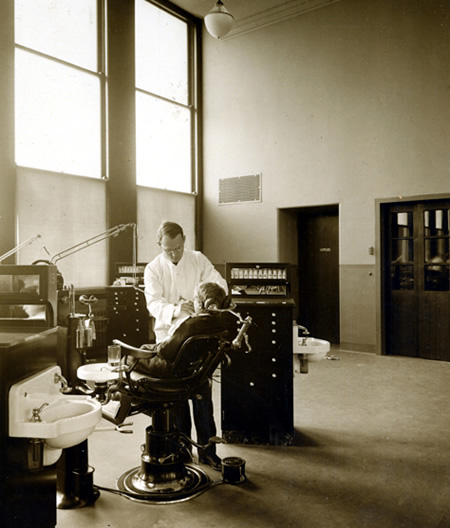 Active cases of tuberculosis, or consumption, were caught at Ellis Island and were housed nearby in a hospital until they died or got better.  However, thousands of immigrants came here infected with TB and spread it around.  An urban dentist was in the peculiar position of sticking their hands in the mouths of hundreds of people, who would cough TB and other particulates into their face daily.  They would have to break loose teeth and do other procedures that exposed them to blood born pathogens.  Being an early dentist, was the most dangerous job, worse than working in a mine or handling explosives. 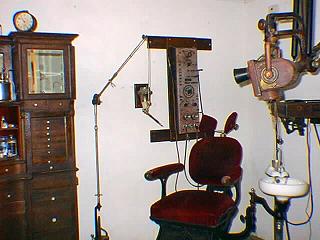 Doc Holliday, the dentist, fell prey to what nearly all of his fellows did – TB from his patients.  It was believed that if you went to dry, hot air climates like Arizona, you would survive the disease better.  That is why Doc moved to Arizona and the safer professions of gambler and gunslinger.  In the end, he died from his earlier days as a dentist.

Above is a picture of the first electric dentist equipment in 1871.  Until then, it was all arm strength, or foot pedaled machinery.  People used to look for dentists with strong arms and a reputation for pulling a tooth with pliers in one yank.  So, next time you watch an old western, remember the real danger seekers were the Dentists!