In my past life, one of my positions was CFO for the Department of Health Services.  I had a number of awesome discussions with our Chief of Psychiatry, Amy Schwartz.  As with most knowledge, it can filter down in strange ways.  In this post, I want to share how it has helped me as an author.

1.  Everyone is the hero of their own novel.  Amy taught me that it is nearly impossible to find someone who does not view themselves as the focal point and hero of their life novel.  No matter the evidence they may be evil, petty or a failure, they never view themselves as a villain or as a background character.  For that reason, I try to write villains that believe they are heroes.  Why do they do what they do?  How do they rationalize their goals and their behavior?

2.  No one views themselves as a side-kick.  At the salon the other day, two ladies were working side by side and called themselves a team.  I asked them, which is the hero and which is the side-kick?  What followed was a pause of silence for a full two minutes.  They both think they are the hero and the other the side-kick, but would never say it.  Whether you have a dominant hero or villain, there are no henchmen, side-kicks or blindly loyal people.  They can be robots, zombies, mind-controlled, crazed cult followers, etc.  However, no one even partly normal will view themselves as your side kick.

They might be the unappreciated reason the hero wins, because of all their work.  They may be waiting to learn from the mentor before coming the master.  They may follow the crime lord out of fear, profit, or wait their chance to betray or move-up the ranks. 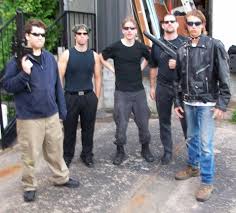 Henchmen – What do they think of themselves?

3.  Even given uniforms and strict appearance rules, people will stand out.  You cannot contain individuality.  Everyone has it.  Whether it be a more confident walk, a gleam to their eye, a sigh before they do something, even in the most homogenous situations, everyone can tell characteristics about the others.  Your story cannot have redshirts or mindless thugs that all look and act the same and be reasonable.  Even a casual observer’s brain will pick up some non-uniformity to classify people.  Tall, short, build, eyes, hair, gait, speech, lack of speech, eye contact, hand positions, skin, clothing condition, something.  I was in the military where they try to make you all the same.  The more they do outwardly, the more you learned everything about the person inside.

4.  People who are positive or negative tend to stay that way.  Even if your hero or villain wins, they will be negative about it if they are negative people.  If they lose, they won’t give up if positive.  Outlook is mostly interior and psychological and not tied to someone’s outward fortunes.

5.  People question authority, gossip and bitch.  Wherever you have a group of people, they will talk about each other, form cliques and complain.  If everyone gets along in your story and supports each other, there should be some supernatural intervention or it won’t ring true.

6.  People do not change with history.  People in Rome wrote graffiti, cheated each other, committed adultery, thievery and made fun of each other just like now.  The more we find about any ancient people, the more we see humans have changed very little in their quests for love, sex, power, conflict, wealth, travel, gossip, etc.  Writing about people 10,000 years in the past or future might not be that different.

7. Group identity causes conflict and confidence.  Our group is awesome.  Your group sucks and might be dangerous.  It’s the basis for nationalism, families, tribes, prejudice, racism, etc.  In any group, one group will cling together against another.  Common friends and common foes.  It might be something nice like which sports team you prefer, or something bad like we want the fresh water from the river and need to kill you to get it.

8.  Maslow’s hierarchy of needs.  You can look this one up.  Basically, we are hard wired to get what we need.  A person dying of thirst, hunger or being tortured to death will do things beyond the pale.  Yes, starving people will be cannibals, murderers and eat trash.  Even if they were normal people two months ago.  Never underestimate the drive of instinct in dire circumstances.  People do not retain ‘civilized’ rules when civilization breaks down.

9.  In a crisis, the most dangerous threat is other humans beings.  If people need things to survive and there are not enough to go around, the math is done very quickly.  Things may go ok for awhile, but the stronger the instinctual need to survive, the longer without needs met, the more dangerous it gets.  Even good people will rationalize their actions.  Remember number 1.

10.  There is no random speech.  All you know is that person told you something at that moment for some reason.  They may have lied, told the truth or been mistaken.  But why did they open their mouth and tell you that?  To make you love them, respect them, fear them?  To fill in a silence?  To test you, because they were nervous, to throw you off the trail?  You can do so much with this in your writing and your life.  Why did that person say this to me, in this place and time, in that tone of voice?  What trail of events or conversation evoked that statement and why?

I hope these help you as well.