NOTE:  This is a repost from ufoblogger and I am not able to verify the veracity of the following.  Still, it seemed bizarre, interesting and ancient, which means I like it and thought you might as well…

Allegedly down below pictures were photographed in Egypt by photographer Gregor Spörri in 1988. Europe’s biggest newspaper bild.de is showing them for the first time in public “exclusively”.
What you are looking at is a gigantic 15 inches long, mummified humanoid finger and the creatures height would be over 16.4 feet! 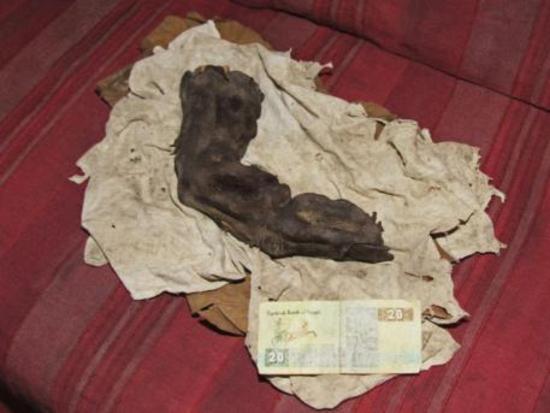 Article Translation :
In 1988, on the last day of his private investigation trip, he contacted an old man from a grave robber dynasty. The meeting was took place in a farm-house in Bir Hooker, 100 kilometers northeast of Cairo.
After paying, $ 300 Spörri had a look at the grave robber unsold treasure. Wrapped in old rags was the bone and dermis.
Spörri told BILD.de: “It was an oblong package, smelled musty. I was totally flabbergasted when I saw the dark brown giant finger.
I was allowed to take it in hand and also to take pictures; a bill was put next to it to get a size comparison. “The bent finger was split open and covered with dried mold.”It was surprisingly easy, maybe a few hundred grams My heart was up to his neck. That was incredible. In size to a matching body should have been about 15 feet tall”
The grave robber also showed the Swiss certificate of authenticity and an X-ray image. Both are from the 60s.

Its not a first time that Giant human body part was discovered or photographed.
The down below petrified finger found in cretaceous limestone, belonged to a “prehistoric” human. Broken short of the middle joint, it measures 7.6 cm (3 inches). At full length it would measure about 15 cm (6 inches). In the photo, it is compared to a regular full-length finger. Excavations of this limestone has also revealed a child’s tooth and human hair. 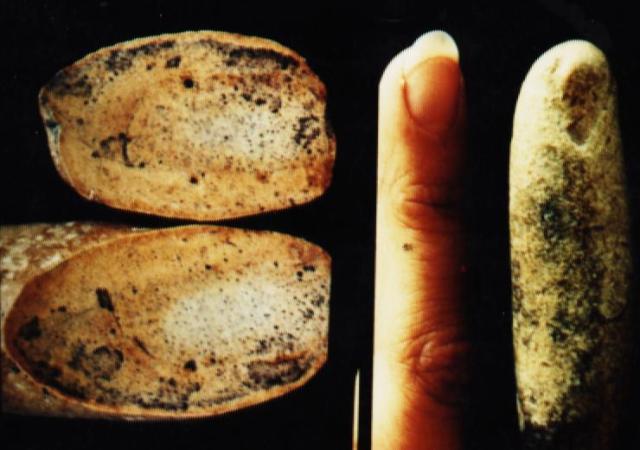 Sectioning reveals the typical porous bone structure expected in a human finger. Cat-scan and MRI identified joints and traced tendons throughout the length of the fossil.
Cat-scan shows dark areas interpreted as the interior of bones and marrow. Areas less dense than surrounding stones, easily pass X-rays, causing darkening of the image. Black area is caused by sectioning.
Source :  http://www.scribd.com/doc/59685586/Giant-Humans
Giants in the Hindu epics and Vedas
In the world of the Ramayana and Mahabharata, Rakshasas are a populous race of supernatural humanoids. There were both good and evil rakshasas, and as warriors they fought along side the armies of both good and evil. They are powerful warriors, expert magicians and illusionists. As shape-changers, they can assume various physical forms, and it is not always clear whether they have a true or natural form. As illusionists, they are capable of creating appearances which are real to those who believe in them or who fail to dispel them. Some of the rakshasas are said to be man-eaters, and make their gleeful appearance when the slaughter on the battlefield is at its worst. Occasionally they serve as rank-and-file soldiers in the service of one or the other warlord.
Aside from its treatment of unnamed rank-and-file Rakshasas, the epic tells the stories of certain members of the race who rose to prominence, some of them as heroes, most of them as villains.
In the Ramayana
According to the Ramayana, the Raksha people (also known as Raksasas) were the inhabitants of Sri Lanka who were said to have lived among the Naga, Yakkha, and Deva, and governed Sri Lanka in 2370 BCE
In the Mahabharata
The Pandava hero Bhima was the nemesis of forest-dwelling Rakshasas who dined on human travellers and terrorized human settlements.
Hidimba was a cannibal Rakshasa who was slain by Bhima. The Mahabharata (Book I: Adi Parva, Section 154) describes him as a cruel cannibal with sharp, long teeth and prodigious strength. When Hidimba saw the Pandavas sleeping in his forest, he decided to eat them. He made the mistake of sending his sister Hidimbi to reconnoiter the situation, and the damsel fell in love with the handsome Bhima, whom she warned of the danger. Infuriated, Hidimba declared himself ready to kill not only the Pandavas but also his sister, but he was thwarted by the heroism of Bhima, who defeated and killed him in a duel.
Ghatotkacha, was the son of Bhima and Hidimbi. His name refers to his round bald head with ghata meaning pot and utkacha meaning head in Sanskrit.
Ghatotkacha, when he was young, lived with his mother Hidimbi, when one day he had a fight with Abhimanyu, his cousin, without knowing that Abhimanyu was Arjuna’s son.
Ghatotkacha is considered to be a loyal and humble figure. He made himself and his followers available to his father Bhima at any time; all Bhima had to do was to think of him and he would appear. Like his father, Ghatotkacha primarily fought with the mace. Rigveda 7.104.24 O warrior! You should destroy both the male Rakshas and female Rakshas who kills by deceit . May such Rakshas not see the light of dawn.
They are termed as Yatudhaan (those who attack human dwellings) and Kravyaad (those who eat raw flesh). Rigveda 7.104.17
A female Rakshasi who like an owl ventures out to kill in night should be destroyed along with other Rakshas. Rigveda 7.104.18
O Powerful Ones! You should stand up to protect the masses and capture the Rakshas who intend to kill and destroy peace in night. Rigveda 7.104.21
The king should destroy those Rakshas who kill others and destroy peaceful activities. Rigveda 7.104.22
Destroy the Rakshas who attack like an owl, hound, wolf , eagle or vulture.
Rigveda 7.104.15
May I be killed today itself, if I become a Yatudhaan (one who attacks human dwellings) or reduce the life of any human. But if I am not so, those who falsely implicate me as being a Yaatudhaan be destroyed.
Giant Human Femur