I have had countless epiphanies in my life.  Most of them were of great importance, but others were just strange.  I was thinking about some of the strange ones this week and thought I might share them.  Let me know if you have similar ones.

An Epiphany – Any moment of great or sudden revelation.

1)  One of my favorite cereals growing up was those sugar encrusted colorful rings of fruit flavors.  Not Trix, the round balls, but the ones shaped liked Cheerios.  Despite having seen the boxes and read them over and over as a child, I was serving them to my own children when I was in my early thirties when I realized they are not Fruit Loops – but instead are Froot Loops.

For some reason I found it deeply disturbing at an intellectual level to have deliberately misspelled breakfast cereal and to not have noticed for two decades.  I kept holding the box in my hands in disbelief.  I looked them up online.  I quizzed others if this was a recent change.  I even stared at aisles of cereal in the supermarket for weeks in silent despair.  Why such a revelation was so unsettling I don’t know.  It was quite an epiphany though to know that I, spelling bee champion so many times over, could not even notice my second favorite cereal was misspelled.  Yes, I did check my favorite, Lucky Charms, to confirm its spelling immediately… Whew…

2) Peppermint Patty from Peanuts was Lesbian.  “It’s safe to say that Peppermint Patty’s relationship with “best friend” Marcy is more than a little Sapphic. Nether girl embraced the softer side of the feminine, but Marcy leaves no doubt about their assumed roles by referring to Patty as “Sir.” Couple that with Patty’s tomboy fashion choices and strong athletic ability and you have a girl who definitely lets you know which way she swings.” [SheWired]

I always liked Peppermint Patty, but I never got the Marcy thing or why she called her “Sir.”  As an adult, it now all makes sense.  There are many cartoon characters which were obviously intended to be lesbian, gay, or other sexual preferences.  It doesn’t really bother me at all.  As a kid, you just want to know the show is fun.  Some point to Velma on Scooby Doo as well, or other characters.  The one I can’t take seriously is He-Man from Masters of the Universe.  I watched that show with my kids and thought it was silly.  Now that I see He-Man I can’t believe I missed the obvious portrayal.  Still, those who worry about tele-tubbies and such things are worried about the wrong things. 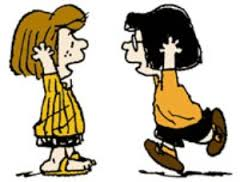 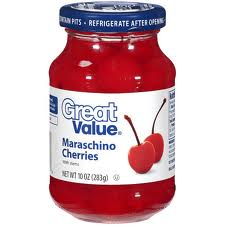 At first, met with these revelations, I pronounced things correctly, only to find that people looked at me strangely.  When I explained I was correct, I looked like a smart-ass.  Now I try to avoid the words, or simply pronounce them wrong.  I still have words I read wrong.  For a long time I read “misled” as “mize-uld” instead of “mis-led”, though I have no idea why.

4)  Growing up poor white trash with a family from the South led me to a very strange vocabulary.  A syringe was a “shot giver”, a stream was a “crick” and if someone was fatigued, they were “tarred.”  They used to say strange things.  I still think of all carbonated beverages as Coke.  Even though we drank RC Cola with Moon Pies or Grape Nehi, we were always drinking a Coke.

It took me the better part of forty years to cleanse my vocabulary of words that do not exist in most parts of the United States.  Unfortunately, growing up in California then living in Hawaii, I developed a nasal surfer accent that even at 50 makes me sound like a teenage valley boy about to go boarding.  To some extent, I passed this accent on to my son as well.  So, you can take the vocabulary out of the man, but not the accent.  As a result, I avoid phone calls and have all my message machines recorded by others.  Almost as bad as seeing my own picture is hearing my own voice on a recording.

5)  Back to Scooby Doo – Ok, Preppy guy and gal having sex, Velma of unknown proclivities, and Shaggy stoned all the time giving his dog snacks.  Those meddlesome kids indeed.  Always finding some monster with a mask on and yet I was surprised every time as a kid.  I did wonder why college age kids always seemed to have time to roam around in a van.  Now I realize you had at least one trust fund kid and their fellow bohemians roaming around doing whatever and trespassing everywhere they went. 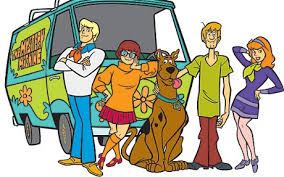 6)  HR Puffinstuff.  Loved this show with the Bananamobile, etc.  Even made a model of the vehicle.  How could I, even as a kid, not get that this was a psychedelic hippy drug show?  More obvious than Cheech and Chong, your main character has big dialated eyes, weird colors and calls himself puffing stuff.  The Banana mobile is where they got high on mellow yellow and then had their “adventures.”  I was crushed when it was cancelled and now wonder how they ever got on the air at all.

7)  All those shows we thought were great in the 60s and 70s and so much better than todays, really suck.  The wonder of Netflix is that you can watch an entire season in one day if properly fixed for coffee and you care nothing for your own health.  The downside is they have all those old “great shows” when writers really cared and acting was great.  OMG!  I started watching some old Mission Impossible, Adam-12, Kolchak the Night Stalker, X-Files, etc.  Ok, I remember them being MUCH better.  Watching them now…not so much.

Is it nostalgia that made us think they were so good?  Is it just because I was younger and had a less developed mind?  Who knows, but watching old TV shows really does show you that today’s shows like Walking Dead, Breaking Bad, Game of Thrones, Sherlock, etc. are really much better.  Will we look back with reverie at these shows now only to watch them twenty years later and grown?  Who knows?

8)  This generation.  Most were not old enough to remember Jimmy Carter or Ronald Reagan as President.  Most do not remember the Cold War or the explosion of growth and technology in the 1980s.  I grew up freezing water and using an ice pick to get ice for a drink.  We had no cell phones, no pagers, no ATMs, no computers, leaded gasoline for 23 cents a gallon called Ethyl, no microwaves, etc.  The mall was the big invention.  MTV came out when I was in high school and played music videos.  Only the cool kids could stay up to watch Saturday Night Live which was considered evil.

I try to think of how people under thirty view the world.  I keep up on the latest, but their generation lives on the latest.  A recent survey showed that twelve year olds were unable to figure out what a Sony Walkman did.  We laughed at eight track cassettes, but now cassettes, floppy disks, VHS, Beta, records, record stores, everything we knew is gone.  My kids never had to go to the bank with a passbook before 3pm when it closed, and have a teller write their balance in ink, knowing if they lost the book they could not prove they had money in the bank. 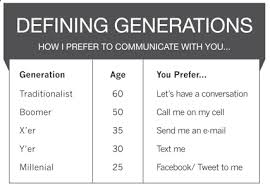 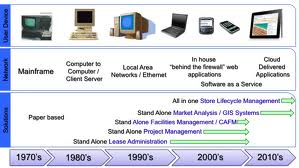 As technology accelerates, one generation has a greater gap than ever from the prior one.  For thousands of years, the next generation could learn lessons and live their lives much as the last.  Now, my early life is like a caveman compared to a Victorian era industrialist.  I don’t think that despite this epiphany, I still REALLY understand just how different this generation is.  I can’t even imagine how different the next will be from the current one.  We are really moving fast in the most rapidly changing culture ever in the history of mankind.

9)  Listening to Jeopardy, I found out that Jackie Gleason considered suing The Flintstones.  Apparently, the cartoon was a total rip-off of the Honeymooners, including plot lines and even copying the voice of Jackie Gleason’s character for Fred.  Wow.  Totally makes sense now, but I had no idea…  In the end, he decided not to sue the cartoon, which went on to be the longest lasting cartoon in history and the first successful one in prime time until The Simpsons.  I wonder whether The Simpsons’ characters are as original as we think…

Those are just some of my revealing thought moments.  What about you?