FoxNews.com
Norwegian ship designer Lade AS has unveiled a futuristic new design for cargo vessels, which uses the ships’ hulls as a sail.

Inspired by sailboats and aerospace, the ‘Vindskip,’ with its hull shaped like a symmetrical air foil, is designed to use the wind for propulsion.  Lade AS says that the ship’s hull will generate aerodynamic lift, giving a pull in the ship’s direction.

The hybrid merchant vessel will also use a Liquid Natural Gas electric propulsion system, which takes the ship to the necessary speed to generate aerodynamic lift on its hull. Additionally, the Vindskip will employ a specialized computer program to analyze meteorological data and calculate the best sailing route based on available wind energy.

Terje Lade, manager of Lade AS, told FoxNews.com that the Vindskip concept is being tested using wind tunnels and computational fluid dynamics. Testing of a model in a water tank is scheduled to begin in April, he explained in an email. Lade AS plans to eventually license the Vindskip concept to shipping companies, ship consultants, and shipyards.

The Alesund-based company has already been awarded two patents for the hull’s ability to generate aerodynamic lift, which it describes as its Wind Power System.

Lade told FoxNews.com that the Vindskip development project will be finished by the fourth quarter of 2015, and estimates that engineering and construction will take approximately 2 to 3 years. “Our estimate is that it should be sailing in 2019,” he added.

The project has already attracted the attention of at least one shipping industry heavyweight. A spokesman for Wilhelmsen, one of Norway’s largest shipowners, told FoxNews.com that the company’s technical department has been involved in brainstorming related to the Vindskip, although there has been no formal involvement or investment in the project. “Some years back, our technical team developed our concept vessel (Orcelle) — and based on this we were invited into the Vindskip project,” he explained in an email.”Our vision is ‘shaping the maritime industry,’ and we value sharing some ‘futuristic’ thoughts and ideas on how shipping can develop some years ahead.” 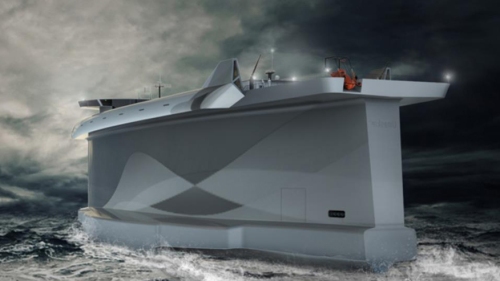 Lade AS estimates that the Vindskip design could generate fuel savings of 60% and reduce carbon dioxide emissions by 80% compared to a traditional ship. The designer says that the design is particularly well suited to a number of passenger and container vessels.

However, Chris Cheetham, founder of Soter Advisors, a fuel and energy risk management consultancy specializing in the shipping industry, said that a number of factors could impact potential savings. “What these designs will come down to is ‘how much does it really cost?'” he told FoxNews.com. “You have to relate that to the cost of building and charter rates for shipping.”

Cheetham cited the huge pullback in oil prices and the “inventory” of traditional ships that are already scheduled to be built as factors that companies will need to consider before licensing a revolutionary design such as the Vindskip.

Story updated from Jan. 19 with comments from Lade AS, Wilhelmsen, and Soter Advisors.