Archaeologists have unearthed 30 tablets, each engraved with curses, at the bottom of an ancient well in Greece, according to a report.

The small “curse tablets” discovered in the Kerameikos cemetery in Athens invoke the gods of the underworld in order to cause harm, or curse, others.

Jutta Stroszeck, director of the excavation on behalf of the German Archaeological Institute in Athens, told Greek City Times last week that it’s unclear who ordered the curses because they are never mentioned by name — unlike the recipient.

Curses on tablets were fairly typical practices in ancient Rome and Greece, according to historians. The tablets date back to the fourth century BCE. 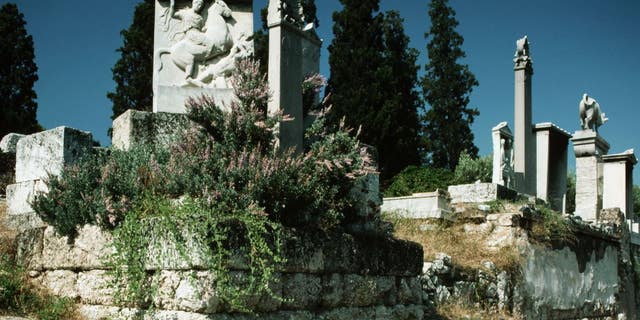 Thirty curse tablets have been found in an ancient well in the Athenian cemetery Kerameikos (seen here). (Chris Hellier/Corbis/Getty)

Christopher Faraone, a professor of classics at the University of Illinois, said that in ancient Athens, most curses were not about killing a person.

“Most of the curses are what we call binding spells: they aim at binding or inhibiting the performance of a rival. A lot of them have to do with legal cases. They say things like, ‘Bind the tongue and the thoughts of so-and-so, who is about to testify against me on Monday,'” Faraone said in a question-and-answer. “We have some that are aimed at rival musicians or actors, and a couple that seem to be connected with athletics. We have some that run something like this, ‘Bind Helen, so that she is unsuccessful when she flirts or makes love with Demetrius.’ But the great majority of them seem to be connected with lawsuits.”

Kerameikos is named after a community of potters that once lived there, according to the Greek Ministry of Culture and Sports.