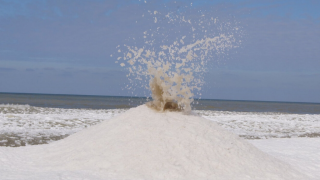 During a stroll on Oval Beach on the lake’s eastern shore, located in the state of Michigan, an employee of the NWS Grand Rapids snapped a few photos of water bursting from mounds in the frigid ground. “You never know what you’ll find at the lake until you go out there,” the employee tweeted. “Today it was volcanoes.”

Despite their nickname, ice volcanoes aren’t really volcanoes at all. The cone-like mounds form at the edges of lakes, where thin sheets of ice form, and water shoots through holes in the ice, Tom Niziol, a contributor for Weather Underground’s Category 6 blog, explained in a Facebook post. Water sloshes beneath the ice sheet and builds up enough pressure to force spurts of water to the surface. If the air above is cold enough, the released water freezes over the surrounding ground, forming a mini volcano of sorts.

“[Ice volcanoes] can be very dangerous to climb on however because they are hollow and built over that hole in the ice,” Niziol said. “Don’t ever go venturing out onto them.”

Frozen volcanoes formed along the shores of Lake Erie a few years ago, Niziol added. Although not unheard of, ice volcanoes remain a relatively rare phenomenon.

“It’s almost a ‘Goldilocks’ situation where you need just the right conditions over a period of time to get these [formations] to develop,” Matt Benz, a meteorologist for AccuWeather, said in a news report. Ice volcanoes typically form near large bodies of water where below-freezing temperatures allow an ice shelf to form over the water’s surface along the coastline, he said. Simultaneously, waves beneath the shelf must be powerful enough to crack the ice and push water out. For this reason, ice volcanoes tend to form along shorelines where winds churn up waves consistently, Benz said.

On Feb. 16, when the Oval Beach volcanoes were spotted, the wind was almost due west, which would have been “ideal for pushing waves right into the shoreline at this location,” Benz added. Due to their enormous size, the Great Lakes may be more likely to form ice volcanoes along their shores than smaller lakes whose water completely freezes over in winter, before much ice can build up along their beaches, he said.

So if you want to see an ice volcano in person, the Great Lakes may be your best bet — but be wary where you step!