The Second Most Important July 4th

The face in the mirror was dark, furrowed by stress and grief, and grown old.  The man had dreamt he would die in office in this dark estate ironically called cheerily as the White House.  In the next room over his beloved wife chanted in a shameful séance with the hope of contacting the spirit of their son Willie who had passed beyond the veil last year at the young age of eleven.  The loss of this second of their four children had pushed his wife past her thinly held sanity and at times he worried she would never come back fully to normality.

He moved from the mirror and looked out over the lawn from the veranda.  It was dark, but the sheep ambled about, half-heartedly eating the early summer grass, failing under the heat and humidity stifling the swampy city during the day.  He wondered when the bloodshed would end.  Surely this calamity had befallen this once great union due to turning from God Almighty and continuing to practice the sins of enslaving our fellow man.  Perhaps his own willingness to preserve the union even if it meant preserving slavery had contributed to the amount of blood that must be shed to purge this evil guilt from the nation.

Abraham… The Father of a Great Nation.  How poorly named am I if I cannot bring this terrible war to an end?  Lincoln looked into the darkness, wondering what he could do next.  There would be an election next year.  After years of battle losses he stood little hope of victory.  The war that was supposed to end in months was three years old and showed no sign of stopping.  If he lost his election, slavery would continue, the union would dissolve, and all this death would be meaningless.

Less than ninety years ago those brave God fearing individuals had risen up and declared this nation free of tyranny on July 4, 1776.  They too had bled for the cause and spent years in doubt to bring forth this new nation conceived in liberty for all.  Lincoln could not help but ponder this on July 3, 1863.  What have I to celebrate on the morrow?

Far away to the west, on a promontory high over the Mississippi River another man stood in front of a mirror, a small shaving mirror jarred by another artillery shell falling on his makeshift shelter in a cut-out mud cave.  His image was gaunt and skeletal.  His hand shook from hunger and thirst as much as the mirror did from percussive explosions.  He wanted to take his time to look proper, shave, and put on his least dirty uniform.

John had called for reinforcements countless times and there had been no answer of late.  Earlier on he had been encouraged to hold fast, to maintain the Gibraltar of the West here in Vicksburg.  Now he found himself surrounded and Union gunboats pounded from the river while Grant’s men assaulted the town non-stop with artillery shells and sniper rounds.  The people of the town and his own men had demonstrated exemplary honor and bravery.  But even that rarest of commodities was gone.

For a week now there had been no food.  The shoes, belts, and rats were the last to be eaten.  The horses had been killed and devoured over a month ago.  Despite the nearness to the huge river, fresh water was scarce.  High on a promontory overlooking a bend in the river, Vicksburg was great for defense but not for digging wells.  The constant shelling and lack of food made even a well digging detail deadly.  His men were nearly out of ammunition and the people of the town were living in caves on the hill, unable to survive in the burnt out buildings of what was once a town.

General John C. Pemberton had served in wars for the Union and was a Pennsylvania born man.  Despite that, he had resigned to join the Confederacy.  His two younger brothers fought for the Union and John knew that if he surrendered Vicksburg, many would claim he was a traitor.  Still, he could not bear to look at another child living in a dug-out mud hole, starving slowly because of his reticence.  What price honor if bought with the lives of his men and an entire civilian population? 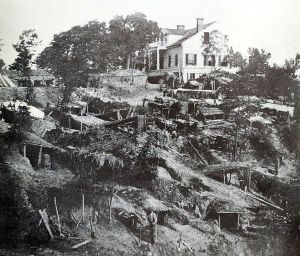 Five days ago the forty-eight year old general known as “the Snapping Turtle” had been placed in command of a beaten army.  The Army of the Potomac had lost every major engagement during the three years of the war and had revolving commanders as a result.  Disorganized and spread out, George had no time to do anything except assign corps and division commanders and pull his forces a bit closer together.  This force was the only defense between Confederate General Robert E. Lee and the Capitol at Washington.

George looked over the maps and dealt with receiving information and sending out orders in the midst of the largest battle of the war.  Two days ago, the Army of Northern Virginia made contact with his men and they were fighting a bloody duel near the town of Gettysburg.  If it was another loss, it could mean the loss of the entire war.  Just three days in charge and this happens.

The first day had gone for the rebels.  Still, despite urgings by some, he put it to his generals to vote in a public meeting on staying.  Afraid to be labeled cowards, they all voted to stay.  It is what George wanted, but he did not want anyone to be able to second guess if they lost.  He had interior lines, made so clearly important by the campaigns of Napoleon.  Each time Lee hit his lines he nearly broke through, but Meade was able to hold on by reinforcing that section.

Today his men seemed to have turned the tide.  Tens of thousands already lie dead and wounded for miles.  The scene was like Hell on Earth.  Despite the carnage the rebels would not stop.  This day, July 3rd, General George Meade could only look at his maps, move his troops, and hope they would hold.  His men were brave, they were here in force in good fortified lines, but could they hold after so many losses?

The following day, Independence Day, President Abraham Lincoln went solemnly down the stairs of his residence to the telegraph room.  Despite the anger of the public, his generals and even his own cabinet, he took a personal hand in managing the war.  Several times per day he received dispatches from his generals and gave them ‘suggestions’ on what they should do.  He finally had generals in place that would fight.  Was it enough?

It was a shocking surprise.  The Confederates had surrendered Vicksburg to General Grant along with 30,000 rebel troops.  The Gibraltar of the West had fallen and the Mississippi was now a Union River.  The Confederacy was effectively cut in two.  General Pemberton had waited until July 4th to surrender in hopes of getting favorable terms on Independence Day.  Instead, General Grant had insisted on ‘unconditional surrender’ and it had been given.

President Lincoln allowed himself a broad smile that was all too rare for him in recent months.  More reports came in.  Victory at Gettysburg.  General Meade reports that the Army of Northern Virginia has been beaten in battle and is now retreating south back into Virginia.  The Capitol is safe; the Union holds the field, victory in the east for now.

Could it really be?  On this glorious Independence Day when the future of the nation was at its darkest, victory at Vicksburg and Gettysburg?  Lincoln leaped to his feet in relief and cheered.  The Union would persevere yet longer.  He might win his next election and finish this horrible conflict.  He would use the loss of so many lives as the catalyst to free those in bondage.  The war, and the nation, would serve a purpose.