We Humans are the Bad Guys in the New Movie “Battleship”

I took my wife out to see a movie.  Each week, for over 27 years, we try to have one or more date nights or things to do once per week.  We both expected to Battleship to be a mindless action film, even more mindless than most.  Afterward, I found it was loosely based on the board game with pegs from the 70s, which is good or I would not have gone to see it.  The trailers for the movie also bothered me because it looks like a battle with naval battleships, which any dimestore military person can tell you no longer exist, and have not since one was briefly out of mothballs for the first gulf war as a bombardment vessel. 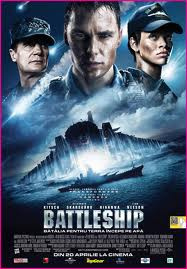 SPOILER ALERT – Don’t Read if You Don’t Want to Know What Happens.

However, there is MUCH more to this movie, probably more than the casual viewer will notice.   First, the bad parts.  You have Liam Neeson who is now competing with Ben Kingsley and Nicholas Cage for one time great actors who simply cannot turn down a part in any movie.  I think the three will score a thousand movies each during their lifetime.  Then there is Brooklyn Decker, who serves virtually no purpose in the film except as the girlfriend/admiral daughter.  But what she really does is just provide eye candy to the point of distraction.  Aliens attacking explosions….flowers, Brooklyn Decker smiling, walking…explosions…  Like that.  She is way to pretty not to simply cut away the rest.  Which comes to another sad point – the pointless use of Rhianna.  Other than some up close camera shots of her amazing eyes, they let Brooklyn Decker take Rhianna out of the film essentially.  The plot between the brothers and the general knowledge of naval command and training is sickening.

Now for the interesting point.  We are the bad guys.  That’s right.  The more I watched, I realized we were the bad guys.  NASA sends this signal out to random planets that might have life.  One answers by sending out five ship, one of which is for communications that accidentally crashes into a satellite and is lost (yes, aliens get across the universe but can’t miss a 50 foot long satellite…)

So, just like the American military would, the remaining ships land in the water, throw up a defensive perimeter, and try to re-establish communications.  They do this right in the middle of our big war games.  So what do we do to communicate?  We send out three people in a rubber dinghy with a vulcan gatling cannon.  First, we pulse a warning claxon.  The aliens do the same, but theirs is too loud and causes minor damage.  So, naturally, they must mean that as an attack?  So, the people in the dinghy make one effort in English.  “Who are you, identify yourself, we are from a warship?”  Pause for five seconds.  Then they board, training their weapons on them.

The aliens respond by rising up out of the water.  So maybe they do want to talk but don’t know how?  Oh no, we fire a shot at them.  Again as a warning…  A warning against what, moving, communicating?  From then on, and throughout the entire movie, we attack the aliens.  The aliens however, have strict instructions not to fire on non-threats and civilians.  They won’t even fire at a warship next to them unless it is actively pointing its weapons at them and shooting them.  Several times they leave off a fight when a person in disarmed.  They literally let humans walk around them as long as they are not attacked.

Out of three ships caught in their perimeter, they only destroy the two that attack them.  (This is where the game comes in.  They fire things that look like the red pegs from the game.  At another point, we see a battleship like board, where each side tries to “find” the other and attack them, using sono boy points.  Otherwise, forget the game.)  In one scene, a nearly human looking alien is fished out of the water.  As the humans force open its protective suit, causing it distress and it starts to die, they look like they are going to torture it for information.  A squad of its friends blasts in, takes it, and leaves, killing no one.  Simply rescuing their friend.  No man left behind.

So, what are the aliens trying to do?  We don’t really know.  The only activity they initiate is to try to use our own equipment that we signaled them with to re-establish communications with home, since they lost their com ship.  We of course think this is hostile.  “The only reason they would communicate is to bring in more ships and attack us.”  But wait – didn’t the movie start with us using that equipment to send them a message?  Using that logic, should they think we did it to send an invasion fleet?

So, the aliens who came all this way to answer our invitation signal, and were so careful never to fire unless fired upon first, why were they here?  We never find out, because we kill all the aliens and celebrate.

I really don’t know if they meant it to be that way or not.  It certainly shows the stupidity of the rules of engagement we have in Iraq and Afghanistan, and the aliens acted more like US Navy and Marines than our humans did.  I felt like the scene from Quentin Taratino’s movie, Inglorious Bastards, where we are disgusted at the Germans for cheering a movie glorifying the slaughter of Americans, while the audience cheers a movie that shows the slaughter of Germans by Americans.

Is Battleship also supposed to show us that about ourselves, or was it an accident?