WHO shuts Sierra Leone lab after worker infected with Ebola

By Umaru Fofana and Media Coulibaly 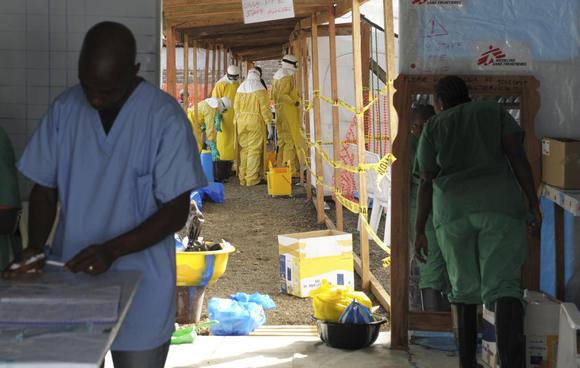 Related News
FREETOWN/KINSHASA (Reuters) – The World Health Organization (WHO) said on Tuesday it had shut a laboratory in Sierra Leone after a health worker there was infected with Ebola, a move that may hamper efforts to boost the global response to the worst ever outbreak of the disease.

At least 1,427 people have died and 2,615 have been infected since the disease was detected deep in the forests of southeastern Guinea in March.

The WHO has deployed nearly 400 of its own staff and partner organizations to fight the epidemic of the highly contagious hemorrhagic fever, which has struck Sierra Leone, Liberia, Guinea and Nigeria. A separate outbreak was confirmed in Democratic Republic of Congo on Sunday.

One of the deadliest diseases known to man, Ebola is transmitted by contact with body fluids and the current outbreak has killed at least 120 healthcare workers.

The WHO said it had withdrawn staff from the laboratory testing for Ebola at Kailahun — one of only two in Sierra Leone — after a Senegalese epidemiologist was infected with Ebola.

“It’s a temporary measure to take care of the welfare of our remaining workers,” WHO spokesperson Christy Feig said, without specifying how long the measure would last. “After our assessment, they will return.”

Feig said she could not assess what impact the withdrawal of WHO staff would have on the fight against Ebola in the Kailahun, the area hardest hit by the disease. The WHO said in a later statement that staff would return after an investigation was completed, adding that testing would continue in the meantime at the Kenema laboratory.

The Senegalese medic — the first worker deployed by WHO to be infected — will be evacuated from Sierra Leone in the coming days, Feig said. He is currently being treated at a government hospital in the eastern town of Kenema.

With its resources stretched by the West African outbreak, medical charity Medicins Sans Frontieres (MSF) said on Tuesday it could provide only limited help to tackle Congo’s outbreak.

A report from the U.N. mission in Congo on Tuesday said 13 people there had died from Ebola, including five health workers.

Congo said on Sunday it would quarantine the area around the town of Djera, in the isolated northwestern jungle province of Equateur, where a high number of suspected cases has been reported. It is Congo’s seventh outbreak since Ebola was discovered in 1976 in Equateur, near the Ebola river.

Congo’s Health Minister Felix Kabange Numbi said on Sunday the outbreak in Equateur was a different strain of the virus from the deadly Zaire version in West Africa, although further tests are planned in a German laboratory.

“Usually, we would be able to mobilize specialist hemorrhagic fever teams, but we are currently responding to a massive epidemic in West Africa,” said Jeroen Beijnberger, MSF medical coordinator in Congo. “This is limiting our capacity to respond to the epidemic in Equateur Province.”

However, the charity said it would send doctors, nurses and logistics experts to the region and would work with the government to open an Ebola case management center in Lokolia.

Louise Roland-Gosselin, deputy head of mission for MSF in Congo, said Congolese Ebola experts working in West Africa should return to their own country to assist with the local outbreak. “MSF can’t do it alone,” she added.

The WHO plans to send protective equipment for medical staff in Equateur.

A 65-year-old woman with Ebola-like symptoms died in the Equateur’s capital Mbandaka, health workers said on Tuesday, raising concerns of a possible spread to an urban center.

Health Minister Kabange Numbi confirmed the death but said the cause was not yet known.

Up to 90 percent of Ebola victims die, although the fatality rate in the current outbreak is lower at close to 60 percent.

The only treatments are extremely rare, experimental and have so far had mixed results. Of the six health workers known to have been treated with unlicensed drug ZMapp, two have died.

Still, the first Briton to have contracted the deadly Ebola virus while working in West Africa has decided to take the drug, the London hospital where he is being treated said, adding that the volunteer nurse was “in good spirits”.

Sierra Leone and Liberia — struggling to recover from a decade of civil war in the 1990s — have seen their healthcare systems overwhelmed by Ebola, the first outbreak in West Africa.

In Liberia, the country that has reported the most Ebola deaths, the health ministry has reported more than 200 new suspected, probable and confirmed cases in a three-day period. Most of them occurred in the seaside capital Monrovia, where two neighborhoods are under army-backed quarantine.

Some Liberian officials have been fleeing the country or just not turning up at work for fear of contracting the virus, prompting President Ellen Johnson on Tuesday to issue orders threatening those of ministerial rank with dismissal.

More junior civil servants would have their salaries suspended, a presidency official told Reuters. It was not clear how many officials would be affected by the presidential order.

Liberia said a ban on travel to the region imposed by neighboring countries was complicating the fight against Ebola and leading to shortages of basic goods. British Airways said on Tuesday it planned to extend a suspension of flights to Sierra Leone and Liberia until December 31 because of Ebola.

“Isolating Liberia, Sierra Leone and Guinea is not in any way contributing to the fight against this disease,” Information Minister Lewis Brown said. “How do we get in the kinds of supplies that we need? How do we get experts to come to our country? Is that African solidarity?”