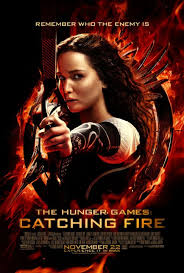 The sequel to the hugely successful first Hunger Games movie was much anticipated and I looked forward to seeing it as everyone was telling me how it was better than the first one.  It is so rare for a sequel to exceed the original that I was skeptical.  I enjoyed the movie, but unfortunately, I did not find it an improvement, as it abandoned the original themes and seemed more of a set up for future movies than a stand alone film.

Katniss Everdeen, played by the awesome Jennifer Lawrence and Peeta Mellark, played by Josh Hutcherson, become targets of the oppressive government after their victory in the 74th Hunger Games sparks a rebellion in the Districts of Panem.  In order to survive, Katniss is supposed to continue to pretend to be in love with Peeta even though her real boyfriend, Gale Hawthorne is played by hunky heart throb Liam Hemsworth.

Spoiler alert – I can’t really explain what is wrong and right with the movie without going into some plot details.  What made the first movie great was the concept that you got to know the competitors and you were tense to see who survived and who would die.  The hunger game itself was the core of the movie with heroes and villains.  In the sequel, the hunger games are abbreviated.  The game itself is more important than the characters.

As a twist to kill off the victors, the Hunger Games for this movie select former victors to be the participants.  As most of them are older, you lose the pathos of kids competing and having to kill each other.  At the same time, you don’t learn enough about any of the competitors to care that much what happens to them.  Each is presented as a caricature, the electric engineer, the hiders, the swimmer, etc.  There is little or no dimension to any of them.  They also form into two large groups which further pulls you away from caring about individuals.  The deaths themselves are brief and more from the contrivance of the game than from each other.

Katniss is the heroine of the first movie but they betray her importance in the end of the sequel.  She finds she is a figurehead for the revolution who has been kept in the dark because she was not trusted to make a tough decision to leave others behind.  Her real boyfriend is part of the conspiracy as are many of her most trusted friends and advisors.  Making Katniss the dupe instead of the heroine really left the movie feeling flat.  At the end, she is being whisked away against her will while important characters are left behind.  Nothing is resolved, merely setting up a third film.  It could easily have said “to be continued” at the end credits.

Worse still is the strange love triangle between Katniss, Peeta and Gale.  At the beginning we have Peeta, still pining away with unrequited love.  Katniss and Gale struggle with whether to run away and be together.  That is why it is so strange when during the games, Katniss seems to genuinely fall in love with Peeta while Gale is secretly planning to rescue Katniss as part of the revolution.  Why does Gale try to get her to run away with him if he is plotting already?  Why does Katniss fall for Peeta after ignoring him for a year when he lives fifty feet from her and was just as noble in the first games?  The love triangle actually feels forced, even for an actress with Jennifer Lawrence’s talents.

If you like the Hunger Games series, as I do, you have to see the second movie.  It is not as good as the first, it is a set-up for the third movie, but as a fan you won’t care much.  If you are not a Hunger Games fan, then you will find it disjointed, confusing, and in the end it has more strings and unfinished plot lines than it does at the beginning.