Dogs Have Been Our Furry Friends for over 33,000 Years!

New bone remains show that our furry little critters have been with us all along.  They used to think that at some point some tribe decided to adopt some wolves and domesticate them.  Now they are coming to realize that as far as history goes back, Man’s Best Friend has been there, cuddly and begging for scraps from the latest kill.  Here is an excerpt from the story:

An ancient dog skull found in Siberia and dating back 33,000 years presents some of the oldest known evidence of dog domestication.

When combined with a similar find in Belgium, the two skulls indicate that the domestication of dogs by humans occurred repeatedly throughout early human history at different geographic locations — rather than at a single domestication event, as previously believed.

“Both the Belgian find and the Siberian find are domesticated species based on morphological characteristics,” said Greg Hodgins, a researcher at the University of Arizona’s Accelerator Mass Spectrometry Laboratory and co-author of a study reporting the find.

“Essentially, wolves have long thin snouts and their teeth are not crowded, and domestication results in this shortening of the snout and widening of the jaws and crowding of the teeth.”

In homage to our dogs, I have a folder full of cute dog pics, but I won’t put them all in here at once, simply a couple, and maybe make this a weekly item.  If you have cute dog pics, and I know you do, feel free to post them under comments, or send me a reasonably sized file to eiverness@cox.net and I will post it here.  But it has to be very cute to make the cut… 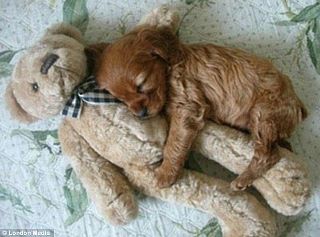