(NEWSER) – Experts have uncovered what LiveScience calls “ghostly” secrets hidden in a medieval manuscript, which happens to be one of the first to reference King Arthur and Merlin. “The Black Book of Carmarthen” was compiled around 1250, but contains poetry, religious verses, and other texts dating as far back as the 9th century. While perusing its old pages with an ultraviolet light, however, experts at the University of Cambridge uncovered additional lines of verse and “quite creepy” ghost-like faces, the Independent reports. High-resolution photos helped researchers get a closer look at what they now think are drawings added to the 54-page tome after its creation. They were perhaps erased by someone named Jaspar Gryffyth, who penned his name in the book now housed at the National Library of Wales. 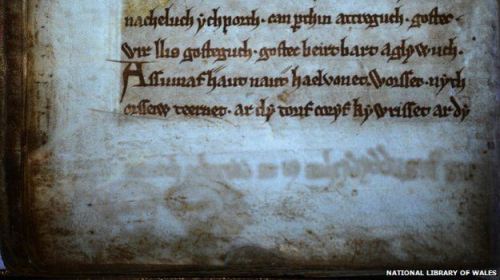 “It was a living text that was constantly added to,” but “this man in the 16th century went through the book tidying it up,” researcher Paul Russell tells the BBC. “The owner erased a lot of material from the left, right, top, and bottom margins. Anything he thought was an addition, he got rid of.” As the pages of the book are vellum, or stretched animal skin, Russell says a pumice stone was likely used. “It takes off a slight layer off the surface, but the ink has penetrated a bit further so what we can do is use UV light to bring out that ink.” Researchers were startled to find faces, a drawing of a fish, and what may be a never-before-seen Welsh poem. They’re continuing to search for more. (Another medieval discovery: a cemetery beneath Cambridge.) 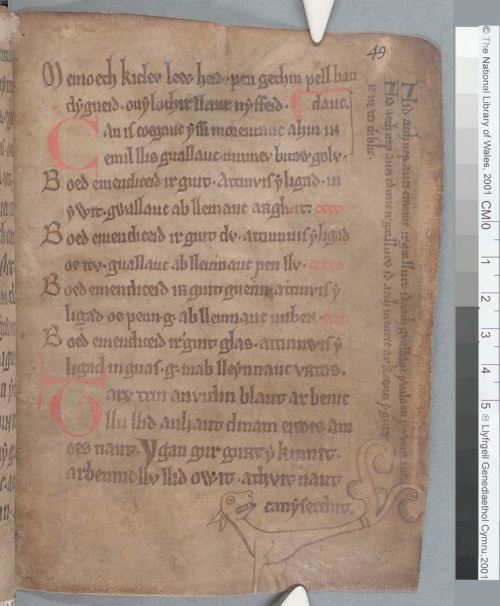