This is the first time that singing mountain gorillas have been caught on camera. 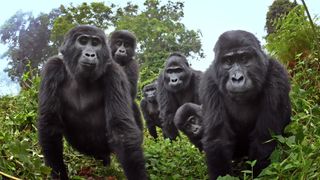 Mountain gorillas have been caught on camera as they “sing” during their supper, a behavior that has never before been documented on video. Filmmakers captured the astonishing footage of the primate crooners with a little help from a very special camera: a robotic “spy” designed to look like a young gorilla.

The singing apes make their television debut on April 29 in the returning PBS series, “Nature: Spy in the Wild 2.” Like its predecessor, which first aired in 2017, the program documents remarkable up-close glimpses of elusive wildlife behavior, seen through the “eyes” of robots that are uncanny lookalikes of the creatures that they film.

Though human camera operators typically keep a safe distance from wild gorillas, the lifelike animatronic gorilla spy was able to infiltrate a troop and film their daily routines, which included an impromptu suppertime serenade.

Footage of the singing gorillas is featured in the first episode of “Spy in the Wild 2” and shows the apes reclining amid dense foliage in a sanctuary in Uganda. As they munched on leaves and stems, they hummed to themselves in contentment, accompanying their vegetarian meal with a vocal “chorus of appreciation,” according to the episode’s narrator.

And the gorillas produced a chorus of mealtime music in more ways than one. Under the spy robot’s watchful camera eye, the great apes also revealed that they were extremely gassy, punctuating their dinner with near-constant bursts of flatulence.

Scientists confirmed in 2016 that gorillas sing to themselves while eating, recording audio of behavior that had long been anecdotal. The researchers observed those western lowland gorillas in a protected forest in the Republic of Congo and published their findings in the journal PLOS ONE.

The PLOS ONE study authors also learned that older gorillas performed mealtime humming and singing more than young gorillas; that males “sang” more often than females did; and that gorillas were more likely to sing while eating aquatic plants and seeds, rather than insects.

Creating a realistic robot spy that could fool a gorilla meant designing a face that was mobile and expressive, particularly around the eyes, said “Spy in the Wild 2” producer Matt Gordon.

“Eye communication is very important amongst gorillas,” Gordon told Live Science. “You’ll see in the footage in the first episode; the gorillas came straight over to our spy gorilla and peered right into its eyes. So we made sure that the gorilla had the most amount of detail put into the face.”

Other types of robotic animal spies might need greater mobility in the air or water, such as an animatronic pelican or sea otter. And infiltrating communities of animals that live in colonies, like meerkats, requires a robot to smell like its animal subjects in order to get close to them.

“We sometimes have to anoint them in feces to allow them to be accepted into the group,” Gordon said. “It’s not the most pleasant of jobs.”

One tricky challenge for the gorilla robot was hat it had to pass inspection by a dominant male. “We wanted to make sure that we were not being threatening, so we averted the gaze of our spy gorilla,” Gordon said. This display of submissiveness convinced the male that the robot wasn’t a threat; he then signaled to the troop that it was safe for them to take a closer look at the “stranger.”

The robot was also able to beat its chest in response to a baby gorilla’s chest-beating, allowing the filmmakers to capture a rare glimpse of primate playtime.

“A young gorilla came over and did the natural thing for him, which was to beat its chest. For a baby gorilla, that means ‘I want to play,’ and if our gorilla was lifeless, not moving, I think the gorilla would have lost interest. But our spy gorilla was able to beat its chest too,” Gordon said.

“We had this wonderful, magical moment where there was this lovely to and fro between our spy gorilla and the baby gorilla, where they were really interacting,” he said. “That would be very difficult to see with traditional filming techniques.”

Other episodes in the new series feature a spy macaque taking a hot spring bath in Japan; a spy seal diving through waters near South Africa; a spy polar bear nosing through sea ice near Norway; and a tiny spy hummingbird flitting alongside thousands of butterflies in Mexico.

“Nature: Spy in the Wild 2” airs nationwide on Wednesdays from April 29 to May 20 at 8 p.m. on PBS (check local listings), and streams on pbs.org/spyinthewild and on the PBS Video app.