In this 1913 file photo, a young T.E. Lawrence (of Arabia), left, and C.L. Woolley pictured in front of the Long Wall of Sculpture at Karkemish in Gaziantep province, Turkey. (AP Photo/Courtesy of the Trustees of the Liddell Hart Centre for Military Archives, File)

ISTANBUL — Few archaeological sites seem as entwined with conflict, ancient and modern, as the city of Karkemish.

The scene of a battle mentioned in the Bible, it lies smack on the border between Turkey and Syria, where civil war rages today. Twenty-first century Turkish sentries occupy an acropolis dating back more than 5,000 years, and the ruins were recently demined. Visible from crumbling, earthen ramparts, a Syrian rebel flag flies in a town that regime forces fled just months ago.

A Turkish-Italian team is conducting the most extensive excavations there in nearly a century, building on the work of British Museum teams that included T.E. Lawrence, the adventurer known as Lawrence of Arabia. The plan is to open the site along the Euphrates river to tourists in late 2014.

The strategic city, its importance long known to scholars because of references in ancient texts, was under the sway of Hittites and other imperial rulers and independent kings. However, archaeological investigation there was halted by World War I, and then by hostilities between Turkish nationalists and French colonizers from Syria who built machine gun nests in its ramparts. Part of the frontier was mined in the 1950s, and in later years, creating deadly obstacles to archaeological inquiry at a site symbolic of modern strife and intrigue.

“All this is very powerfully represented by Karkemish,” said Nicolo’ Marchetti, a professor of archaeology and art history of the Ancient Near East at the University of Bologna. He is the project director at Karkemish, where the Turkish military let archaeologists resume work last year for the first time since its troops occupied the site about 90 years ago.

At around the same time, the Syrian uprising against President Bashar Assad was escalating. More than 100,000 Syrian refugees are sheltering in Turkish camps, and cross-border shelling last month sharpened tension between Syria and Turkey, which backs the rebellion along with its Western and Arab allies. Nuh Kocaslan, mayor of the nearby Turkish town of Karkamis, said he hoped the Syrian war would end “as soon as possible so that our region can find calm,” and that the area urgently needs revenue from tourists, barred for now from Karkemish because it is designated a military zone.

Archaeologists say they felt secure during a 10-week season of excavation on the Turkish side of Karkemish that ended in late October. One big eruption of gunfire from the Syrian side turned out to be part of a wedding celebration. The team arrived in August, one month after Syrian insurgents ousted troops from the Syrian border town of Jarablous. A Syrian government airstrike near Jarablous killed at least eight people that same month.

About one-third of the 90-hectare (222-acre) archaeological site lies inside Syria and is therefore off-limits; construction and farming in Jarablous have encroached on what was the outer edge of the ancient city. Most discoveries have been made on what is now Turkish territory.

When a British team began work in 1911, the undivided area was part of the weakening Ottoman Empire. Germans nearby were constructing the Berlin-Baghdad railway, which traverses the ancient site along the border. Archaeologist C.L. Woolley and his assistant, Lawrence, found basalt and limestone slabs carved with soldiers, chariots, animals and kings; many are displayed today in the Museum of Anatolian Civilizations in Ankara, the Turkish capital. The remains of palaces and temples were also uncovered.

A 1913 photograph shows Woolley and Lawrence at Karkemish. They appear to squint in harsh sunlight. Lawrence’s hands rest, partly clenched, over his bare knees. He wears Western dress.

Lawrence wrote letters about making casts of Hittite inscriptions, mending pottery, photographing items, settling “blood feuds” among workers on the dig, a foray into gun-running in Beirut, and a sense of wonder on a visit to nearby Aleppo, today the scene of fierce battles in Syria’s civil war. 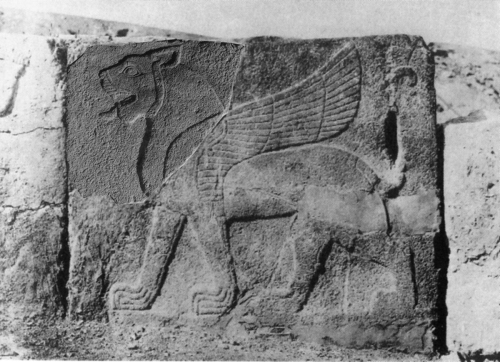 “Aleppo is all compact of colour, and sense of line: you inhale Orient in lungloads, and glut your appetite with silks and dyed fantasies of clothes,” he wrote. “Today there came in through the busiest vault in the bazaar a long caravan of 100 mules of Baghdad, marching in line rhythmically to the boom of two huge iron bells swinging under the belly of the foremost.”

Lawrence later acquired fame for his role in an Arab revolt against the Ottomans, who allied with the Germans during World War I. Photographs of Lawrence in Arab garb, his later writing, and eventually the cinema epic “Lawrence of Arabia” elevated his legend.

The Bible’s Jeremiah refers to Karkemish for a battle there in which the Babylonians, led by Nebuchadnezzar II, defeated the Assyrians and their Egyptian allies. Invading forces sacked the city on several other occasions. Irene Winter, an archaeologist who visited Karkemish in 1974 and recently retired from Harvard University, said the place was significant as a “hub of all east-west traffic” and “a powerful, crucial juncture in the topography of movement and trade and military activity.”

In the ruins of the excavation house of its British predecessors, the Turkish-Italian team discovered old archaeological tools, statue fragments and a Roman mosaic. Elsewhere, they found a bronze cylinder seal inscribed with hieroglyphs that belonged to a town official and a bronze statuette of a god with a double-horned tiara and a skirt, along with a silver dagger set into the left hand.

“You do feel a connection with what has been written, with what has been found and, of course, with the people who were here,” said Marchetti, whose team used a laser scanner to create digital models of artifacts. It got a more complete picture with satellite imagery as well as aerial photos taken from a kite.

The British only excavated a small area of Karkemish, and the Turkish military occupation shielded the site from smugglers, suggesting its archaeological potential remains vast. Despite the many finds, there are gaps in the understanding of the city’s chronology.

Philologist Hasan Peker of Istanbul University, deputy director of the project, said he hoped to find the city’s “royal archives” dating from the height of the Hittite empire more than 3,000 years ago. The team has asked the Turkish military for access to the acropolis, where a watch tower stands.

A demining agency from Azerbaijan helped Turkey to remove anti-tank and anti-personnel mines around Karkemish under a program to rid the nation’s borders of minefields, mostly near Syria. There remains a statistical risk of mine blasts, however remote. The new team, which includes university students, sticks to approved paths. Plans for tourist facilities include paths with rails on both sides to ensure the safety of visitors.

In 2009 and 2010, professor Tony Wilkinson, an archaeologist at Durham University in Britain, participated in a survey of the Syrian side of Karkemish. He could not return in 2011 because of the uprising. As late as May this year, Wilkinson said, Syrian colleagues from the archaeological museum in Aleppo reported that they were checking the Karkemish site.

Since then, fierce fighting has swept Aleppo. Contact has faded. Last month, Wilkinson received a nighttime telephone call from Syria.

“It didn’t get through. They tried to call me and I tried to call back,” he said. “Communications with Syria are very, very difficult.”