I am already tired.  Cons are a sensory overload as you are surrounded by fund people, awesome costumes, products, guests, etc. all while walking on concrete floors for 16 hours.  It starts like an awesome stroll and turns into the Bataan Death March.  In any case, my wife and I are at booth 319 and we are selling well and having fun.  Here are some pictures of folks, mostly from my phone camera.  Enjoy! 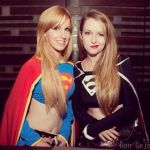 Michonne was there signing photos 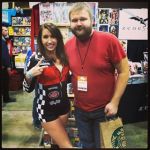 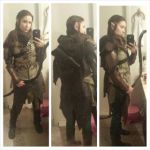 Me, left, Alina with Omega 1, and Alfred Trujillo

Beauty and the Beast

Me and awesome Cara Nicole aka AZ Powergirl, Shadowlands, etc.

Clay and the Lone Ranger

Friends ready for a fight

Hound (The Dog) from Game of Thrones, left, Marine fighting Aliens on right, but he has a baby alien on his back, poor guy.

Friends to the end

Jessica Nigri preparing to lay out her posters for a signing

Monika Lee just finished setting up, waiting for the rush of fans

Aurora and Mary DeBalfo. Can you believe Mary just had her second baby by husband Mike deBalfo? Lucky man.

Kip Murrat of Kipsworld and his model