Sunday my wife and I watched Captain America, The Winter Soldier.  As fate would have it, Congressman Trent Franks and his awesome wife Josie went to see it at the same time at the same theater.  We’ve not seen them in a long time but I first met them back in 1989 and they are great people.  Ironically, the members of the House Armed Forces Committee call Trent Franks “Captain America” because of his well-known patriotism and commitment to veterans.  It was really good to see him and his wife still have a movie date night besides having young kids and his busy bi-coastal schedule between Arizona and Washington, D.C.

The movie was awesome.  One of the best I have seen in awhile.  Unfortunately, it was a bit violent for the people who brought their young children to see it.  I would recommend age 14 ate least.  There is not just killing, but tons of violence and action.  I will probably write a review, but until then, I recommend it if you are considering watching it to go out and enjoy it. 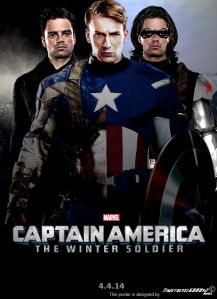