Russian Cops Ban Short Skirts After Skirts Get Too Short 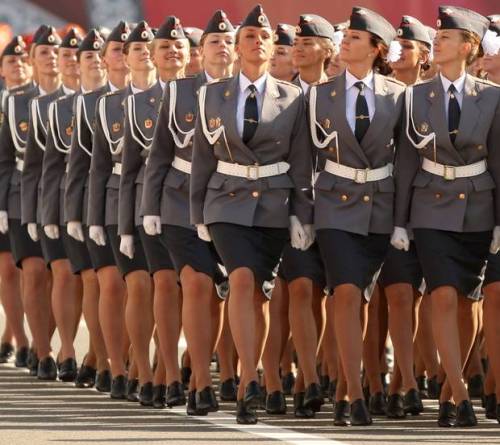 Or at least the public’s perception of you. That is the principal argument behind the Russian Interior Ministry’s recent ban on short skirts and other uniform modifications, the Moscow Times reports.

“When you meet people, the first thing you see is their clothing, and for a police officer fulfilling his duties, it is crucial to have a tidy and neat appearance. From time to time, we have seen instances of officers improperly wearing their uniforms. … Heads [of departments] must pay more attention to the appearance of their subordinates,” Deputy Interior Minister Sergei Gerasimov said in a memo obtained by Russian newspaper Izvestia.

The Moscow Times reports that the ban was imposed to counteract a growing trend of rising hemlines among female officers, as well as a tendency of male officers to cut off their shirt sleeves. Department heads are encouraged to inspect uniforms daily to make sure they’re appropriate.

Here’s a photo that allegedly depicts a small group of infractions just waiting to happen:

(We can’t think of a single police force where high heels are standard uniform.)The photo ran in the Moscow Times, but we’re taking it with a grain of salt.

We’re always hungry for more proof. Feel free to tweet your modified Russian police uniforms at us (before the state’s hammer blow crushes your freedom).

It’s worth noting that in the U.S., female officers commonly wear pants.

NOTE from me:  (The validity of this story cannot be confirmed, but just figure Putin would ruin another good thing, just like the Ukraine.)