What does it mean when a beckoning cat has its right paw or its left paw raised? What 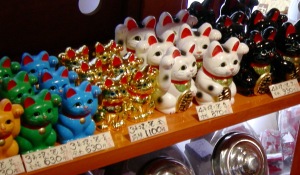 do the different cat colors mean? What about the coin the Lucky Cat holds, or the bib?  The meanings can vary from region to region within Japan, and some meanings have changed over time, but here is a general summary: 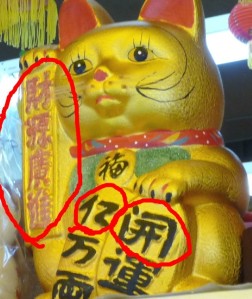 While the Beckoning Cat originates in Japan*, it has also become a popular good luck figure in Chinese businesses. Among these businesses, gold beckoning cats seem to be particularly popular (gold being associated with the desired wealth and prosperity of the business). One of our blog readers pointed out the meaning of some of the writing on the coins of the Chinese Lucky Cat at left (see areas circled in red). On the cat’s right paw (to the left of the photo) is a typical Chinese phrase of hope for good fortune (something like “the source of money spreads widely”). The middle is billion in simplified Chinese (another reader suggests the Chinese character circled in the middle is “5” or “go” in Japanese, which means “50,000” when paired with the character underneath). Another reader suggests the character on the right (under the left paw) means “open fate/destiny”, or “kai un” in Japanese. Japanese kanji is based on Chinese writing, and the meaning of the writing on Japanese lucky cat coins is similar (readers of Chinese and Japanese, please feel free to verify or comment). Maneki Neko collector, Don Hargrove also provides some more info on the coins in his comment in our “About” section.

The kanji at right is quite common on Japanese Maneki Neko coins (the coin is called a koban).

* For info on the Japanese origin of the beckoning cat, see this earlier blog post.