People smoked pot to get high 2,500 years ago, study says

Getting high on marijuana may not be a modern pastime, as archaeologists have found the earliest clear evidence to date that people were smoking cannabis for its psychoactive properties some 2,500 years ago.

They found evidence of burned cannabis with high levels of tetrahydrocannabinol (THC) (the cannabis ingredient responsible for the high) on 10 wooden incense burners, known as braziers; the burners were found alongside eight human burials at an ancient site known as Jirzankal Cemetery (also called Quman Cemetery) on the Pamir Plateau of western China. 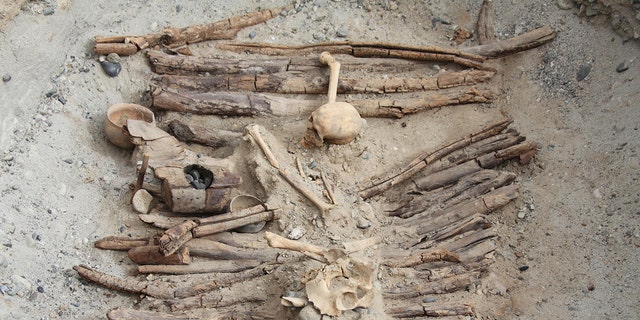 One of the tombs that archaeologists excavated on the Pamir Plateau. (Xinhua Wu)

The burners all carried a mystery residue, which a chemical test soon revealed to be cannabis. “To our excitement, we identified the biomarkers of [cannabis],” study co-researcher Yimin Yang, a professor in the department of archaeology and anthropology at the University of Chinese Academy of Sciences, told reporters at a news conference. [25 Odd Facts About Marijuana]

Researchers have known for decades that ancient people in eastern China cultivated cannabis as long ago as 3500 B.C. But this cannabis was grown as an oil-seed and fiber crop, and so it had low psychoactive properties. In other words, the ancient people harvesting cannabis for these purposes probably weren’t smoking or ingesting it for its high.

The cannabis residues found in the braziers, however, tell another story. It’s likely that ancient people purposefully selected cannabis plants with high THC levels and then smoked them as part of a ritual or religious activity associated with these burials, “perhaps, for example, aimed at communicating with the divine or the deceased,” the researchers wrote in the study.

Archaeologists began excavating Jirzankal Cemetery in 2013, and were intrigued to find the braziers, which held heating stones. To determine what these ancient people had burned, the archaeologists partnered with Yang’s team, which used a technique known as gas chromatography mass spectrometry (GC/MS) to analyze the chemical residues on the braziers.

In the first test, the researchers found biomarkers of cannabis on the internal charred wood of a brazier. Then, they analyzed an ancient sample of cannabis from the 2,500-year-old Jiayi Cemetery in Turpan, China, where the plant was found laid across a man’s chest as a burial shroud. This test showed preserved components of cannabis, including cannabinol (CBN), cannabidiol (CBD) and cannabicyclol (CBL).

While THC does not preserve well, CBN is a good indicator that it’s present. Intriguingly, the researchers found ample CBN on the wooden braziers and on two of the stones, indicating that its THC levels were higher than those typically found in wild plants. As a control, they tested samples from the outside of the braziers, but didn’t find any cannabinoids.

Of note, the burials are more in line with the ancient mortuary practices from ancient Central Asia, including the modern-day countries of Uzbekistan and Kyrgyzstan, than they are from China, the researchers said.

Where did the psychoactive pot come from?

Most wild cannabis, as well as early cultivated varieties of the plant, contain low levels of psychoactive compounds. So where did this high-THC variety come from?

The researchers have two main ideas. Perhaps a wild variety of pot with high psychoactive levels arose naturally, and then humans found and cultivated it. “I agree that humans are always going to be looking for wild plants that can have effects on the human body, especially psychoactive effects,” study co-researcher Robert Spengler, the laboratory director at the Max Planck Institute for the Science of Human History in Germany, told reporters.

How did cannabis with high THC levels come about? Given that Jirzankal Cemetery is high up in the mountains — more than 9,800 feet (3,000 meters) above sea level — perhaps the plants encountered stressors there that led them to create more psychoactive properties, the researchers said.

In this line of thinking, the extreme mountain environment — such as low temperatures, low nutrient availability, high exposure to ultraviolet rays and strong light intensity — may have caused the plants to change how they produced or metabolized certain compounds, which could lead to the creation of greater amounts of psychoactive compounds, the researchers said.

“This is potentially linking these plants — the plants with higher THC production — to higher elevation,” Spengler said. “But that’s all fairly theoretical, so we really cannot pinpoint exactly what the mechanisms for the higher THC level are.”

Another idea is that humans — either intentionally or inadvertently — played a role in increasing the plant’s psychoactive properties. Perhaps people bred different marijuana plants that led to varieties with higher THC levels.

“Some of them may have been rapidly domesticated by humans simply moving them or transporting them [along trade routes such as the silk road] … from the Caucasus all the way to East Asia,” Spengler said. “So, it’s possible that humans were still inflicting evolutionary changes on these plants without actually intensively cultivating them.”

That said, it’s still an “open debate” whether the psychoactive pot occurred naturally, or whether humans played a role, he said.

The study is the latest to look at cannabis’s origins and historic uses. In May, another group of researchers posited that the cannabis plant likely originated high on the Tibetan Plateau, according to an analysis of fossil pollen. The new finding “provides yet another piece in the biomolecular archaeological puzzle of the ‘abiding mystery of Central Asia’ and its impact on human cultural and biological development through the millennia,” Patrick McGovern, the scientific director of the Biomolecular Archaeology Project at the Penn Museum in Philadelphia, who was not involved in the study, told Live Science. “Much more remains to be learned.”

The study was published online today (June 12) in the journal Science Advances.