Did Van Gogh shoot himself? Auction of pistol reignites debate. 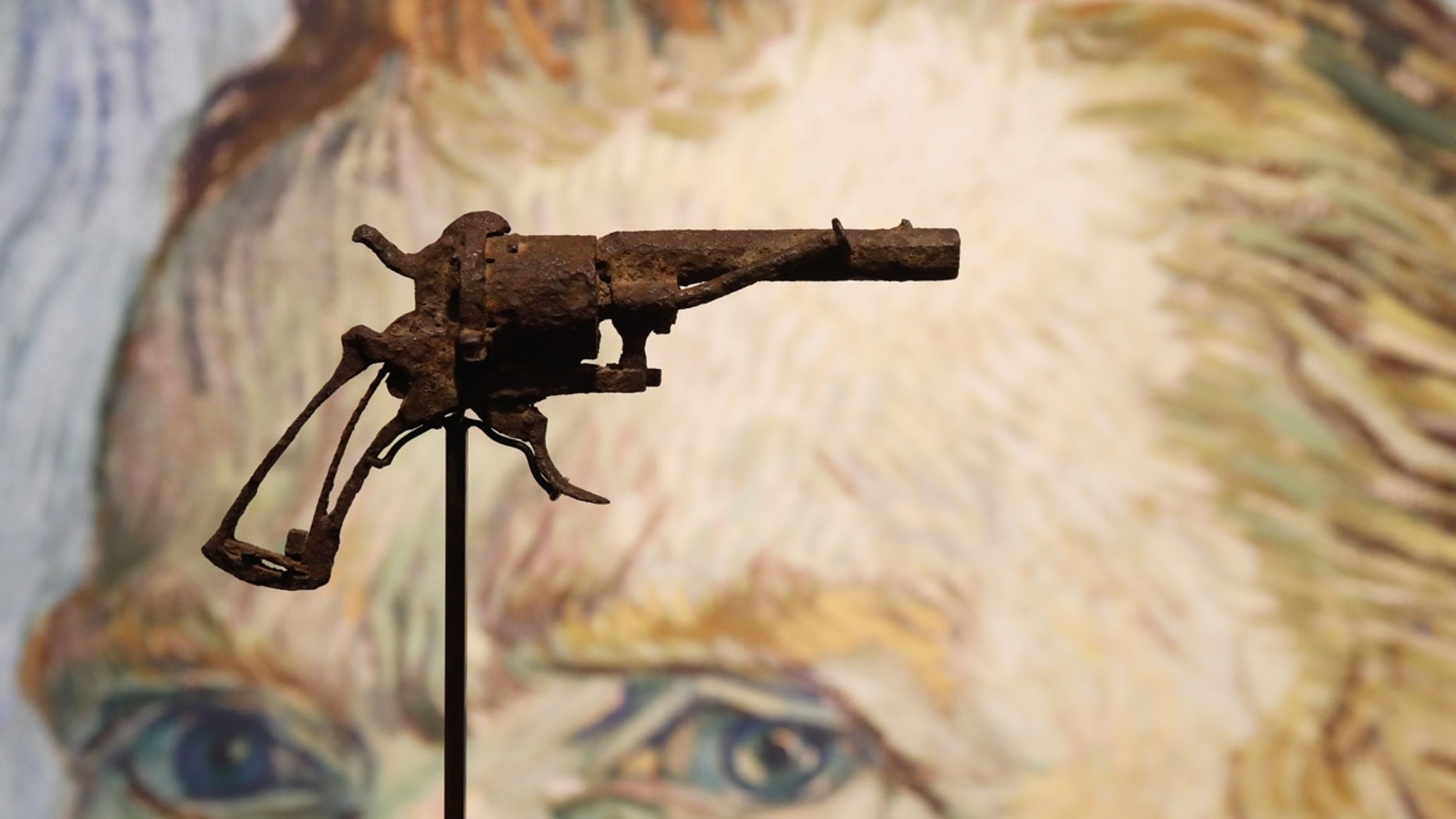 The pistol thought to be the one used by Van Gogh to shoot himself is on public display at Paris’ Drouot auction house. (FRANCOIS GUILLOT/AFP/Getty Images)

The auction of a pistol said to have been used by the painter Vincent van Gogh to shoot himself has reignited a debate about who actually pulled the trigger: Did Van Gogh commit suicide, or was he shot by someone else?

The gun will be auctioned in France on Wednesday (June 19), where it’s expected to sell for more than $50,000.

For years, most Van Gogh experts have accepted the explanation that he shot himself in the chest with a pistol in a suicide in July 1890. [30 of the World’s Most Valuable Treasures That Are Still Missing]

Such a gun was found more than 70 years later, in a field near the French farming village of Auvers-sur-Oise where Van Gogh died, and it has widely been accepted as the weapon he used to shoot himself.

Van Gogh lived on for 30 hours before dying from the wound. His last words, according to his brother Theo, were “the sadness will last forever.”

In the years since his death, the Dutch expressionist painter, who cut off his left ear in a dispute with the painter Paul Gauguin has become the archetype of a despairing, suicidal artist overcome by depression.

But in 2011, biographers Gregory White Smith and Steven Naifeh argued that Van Gogh didn’t shoot himself, but was shot accidentally by 16-year-old René Secrétan, who was spending the summer in the village.

According to their biography “Van Gogh: The Life” (Random House, 2011), Secrétan and his brother both befriended and bullied Van Gogh when he stayed at Auvers — and that Secrétan possessed the gun involved.

Based on a number of lingering mysteries about the last hours of Van Gogh’s life, the authors proposed that the artist was shot during a scuffle with Secrétan; then, he implied that he had shot himself, in order to cover for the boys, they wrote in an essay in Vanity Fair.

The theory that Van Gogh was shot by another is disputed by some experts on the life of the artist. But Naifeh told Live Science that he was more convinced than ever that Secrétan shot Van Gogh.

The gun being auctioned in Paris next week is a Belgian-made 7mm Lefaucheux revolver — a popular small caliber handgun at that time.

The gun matches the description of the 7mm bullet taken from Van Gogh’s body by his doctor, and it is theorized that its low power may be why Van Gogh didn’t die immediately but staggered back to his hotel with the bullet still lodged in his chest.

The pistol was found by a farmer in 1965 — 75 years after Van Gogh’s death — in a field at Auvers, badly corroded and beyond use. It was then given to the family who owned the hotel where Van Gogh died.

Grégoire Veyrès, the auctioneer for Auction Art who is conducting the sale, told Live Science that an investigation by the writer Alain Rohan determined that the corroded weapon had been buried in the ground for at least 50 years. [In Photos: Van Gogh Masterpiece Reveals True Colors]

Rohan’s investigative work was accepted as valid by the Van Gogh Museum in Amsterdam, which displayed the gun in a 2016 exhibition about the artist’s mental illness, Veyrès said.

According to Van Gogh expert Martin Bailey, who writes regularly on the artist for the Art Newspaper in London, the gun is accepted among many Van Gogh scholars as the weapon that he used to take his own life.

According to Van Gogh expert Martin Bailey, who writes regularly on the artist for the Art Newspaper in London, the gun is accepted among many Van Gogh scholars as the weapon that he used to take his own life.

“I believe it highly likely, although not certain, that it is the actual gun,” Bailey told Live Science, adding that the Van Gogh Museum had also stated there was a “strong possibility” that this was the gun he used.

While the 2011 biography by Smith and Naifeh was “excellent,” he said, many Van Gogh experts didn’t accept their theory.

“I am convinced that it was suicide, not murder or manslaughter,” he said. “Van Gogh’s family and close friends believed it was suicide.”

Naifeh, who won a Pulitzer Prize with Smith in 1991 for their biography of the American painter Jackson Pollock, said his discussions with forensic experts had strengthened his belief that Secrétan shot the artist.

“I have only become more convinced that it is more likely that he was shot in a scuffle than that he wasn’t,” he told Live Science.

Naifeh noted that there was no evidence linking the gun either to Van Gogh or to the manner of his death.

Although Van Gogh is one of the most famous artists in the world — one of his paintings of a farmed field, completed a year before his death, sold for $81 million in 2017 — he sold only one painting during his lifetime, for 400 francs.

The most expensive Van Gogh painting to date was sold for $82 million in 1990, the “Portrait of Dr. Gachet” from 1890. Gachet was the doctor who would ultimately attend his death later that year.