Archaeologists in Israel’s Golan Heights have discovered an ancient city gate from the time of King David.

The find was made during an excavation at the ancient city of Bethsaida. “There are not too many monumental discoveries dating from the reign of King David,” Rami Arav, associate professor at the University of Nebraska and Bethsaida excavation director, told Fox News via email. “This is absolutely a significant contribution to biblical archaeology and biblical studies.”

Arav explained that Bethsaida was founded in the 11th century B.C. as a pre-planned city and the capital of the Biblical kingdom of Geshur. “The city included a place, granary, city walls, city gate, a high place in the city gate, and a cobblestones courtyard in front of the gate,” he said.

The city was destroyed in 920 B.C. “Since this is the period of time of King David and since the Bible narrates that King David married Maachah the daughter of Talmai the king of Geshur, it is reasonable that King David walked on these very cobblestones when he visited the city,” Arav added. 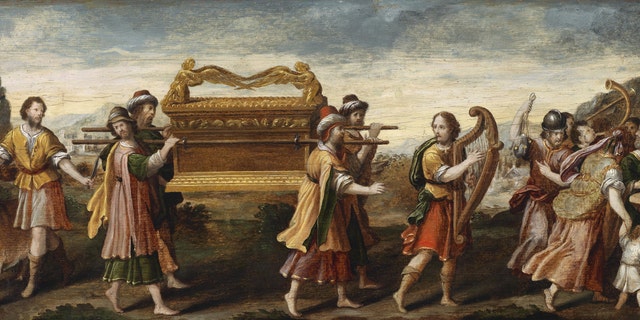 King David bearing the Ark of the Covenant into Jerusalem depicted in the early 16th century. From a private collection.(Photo by Fine Art Images/Heritage Images/Getty Images)

An ancient stele, or monumental stone slab, was discovered adjacent to the gate’s tower. The stele depicts the Moon-god worshipped by the ancient Aramean people.

Arav explained that the discoveries were made during the 32nd season of excavations in the ancient city. The project was initially sponsored by Israel’s Haifa University, then by the University of Nebraska at Omaha. It is now sponsored by the Hebrew Union College in Jerusalem.

The Jerusalem Post reports that a gate discovered at the site last year likely dates from the First Temple period when the city was known as Zer.

In a separate project, last year archaeologists in Israel uncovered an ancient site that may offer fresh insight into the biblical kingdom of David and Solomon.  The kingdom is described in the Hebrew Bible but has long divided historians.

While some experts believe that it existed in the 10th century B.C., others have questioned its existence, citing a lack of evidence of royal construction at the center of the region where the kingdom is said to have existed.

However, part of the building at Tel ‘Eton in the Judean foothills has been dated to a period in history that coincided with the supposed joint kingdom, according to a study published in the journal Radiocarbon.

In another project, soldiers at a paratrooper base in Southern Israel recently uncovered a Biblical-era watchtower.

The watchtower, which dates back to the 8th century B.C., was revealed during recent excavations by Israel Defense Forces troops working under the direction of the Israel Antiquities Authority.