This is a first draft of a short story, just 1,400 words, or about a four minute read time on average.  It is original fiction by yours truly.  It will most likely be included in my sixth or seventh a book, an anthology with a working title of “Twisted Futures.”  I hope you enjoy it.  Please feel free to comment if you love, hate, etc., the concept or the writing.

Ben sat down the heavy barrels of goop that fed the copier machine.  Why can’t he ever do anything?  Mister all important Assistant Manager Jones can’t do shit without telling me to do it for him.  Ben sulked slowly from the supply room to the counter.  Only three people in line.  Wow.

Jones glared at him and hissed, “Just because you only have one arm doesn’t mean your two legs can’t move as fast as anyone else.”

Ben lowered his head and bit back his response.  What a total asshole.

“Can I help whoever is next?”  Ben waited while the customers looked at their number pull tags and a couple came up after figuring out they had the lowest number.

“Yes young man.  It’s my husband George here.  We were saving up to get copied together, but he isn’t feeling well at all today.  I think we better just get him done and then do me later.  To be on the safe side.  Besides, his job at the factory can be kind of demanding.  Nothing like a fresh duplicate they say.”

Ben stared at the elderly couple and sighed.  “Do you happen to have the data chip with you?”

The old woman searched through her purse and found an inch square chip, hastily removing lent and cat hair from it.  She handed it over to Ben.

“Great.”  He blew off the rest of the cat hair and examined it.  “This is over forty years old, might take a bit of work.  When do you need it done?”

The lady huffed and pointed to her elderly husband George.  “Just look at him young man, we need it now.  We’ll wait.”

“Fine.”  Ben opened the flip counter and motioned for George to join him.  They walked back to the duplicator.  “So, George is it, you want any changes?  Want me to use copy shop software and add some muscles, brains, different face or anything?”

George leaned heavily against the machine, holding his chest and wheezing.  “No, I’m fine with just a good clean copy.”

“A basic copy it is then.  That’ll be ten thousands credits, payable now.  We find it harder to collect afterwards and we have the cost of the materials and all.”

The old man inserted his hand into the charge-all and put his eye to the retina scanner.  After a few flashes there was a ding.  “There you go, can we get on with it now?”

“Sure, sure.  You want us to dispose of the old copy, or you want to keep it?”

The man looked at his liver-spotted arms and shriveled hands for a minute.  “Just get rid of the old copy.  I don’t know what I’d do with it anyway.”

Assistant Manager Jones stepped over and whispered, “What the hell is the hold up Ben, we’ve got others still waiting, get going.”

Ben felt his anger rise, but didn’t want to get in trouble again.  He needed every credit to keep his apartment and his go-ped.  Angrily he stomped over to the control panel, jammed in the old disk and hit the start button.

Ben leaned on one foot and retied his other shoe.  The machine hummed and whined as it shredded the old copy and began to rebuild the new one.  This old machine usually took a good five minutes, where the new state-of-the-line bio-dimensional copy machines took less than a minute.  You-Copy stores were too cheap to buy the new stuff though.  People coming here just wanted the same old, nothing fancy.

The lights indicated it was about half-way through the construction process when the warning panel turned red.  “What the?”  Ben looked at it with a squint.  Out of goop?  Shit!  I got so mad at Jones I forgot to check the damn goop.

Ben felt his face turn heated and red.  “It ran out of goop.”

Ben looked at the readout.  “It’s the blood goop.  The disk says A negative, but it ran out.  I better go get some quick.”

Jones grabbed Ben’s one arm as he started for the store room.  “Too late for that dumbass, you can’t let it sit that long.  Watch this.”

Ben tugged his arm free and watched his boss.  Jones flipped the goop trays to O positive.  “See, you just give him different blood.”

“Won’t that mess shit up Jones?”

“Nah, as long as it’s all the same.  We’ll just give him an updated disk and no one will be the wiser.  If the copy needs work, they look at the new disk and know O positive.”

Jones pressed the start button again and the machine went back to humming and whining.  Several minutes later the copy came out.

George looked around a bit bewildered at first.  Then his head seemed to clear.  “Yes, I don’t recall your name though.  Is my wife Gladys still waiting here?”

Ben looked at the copy.  George had a brand new duplicate body that looked roughly twenty years old.  Everything seemed to be fine.  “Sure, it’s only been a few minutes.  You’re all paid up Sir, just head this way and I’ll take you to her.”

George and Gladys left the store and Ben started to the counter but was headed off by Jones.  “How long have you worked here Ben?”

“You know I’ve been here for many years Jones.  As long as you.”

“Well one day you damn well better learn to check your goop before pressing the start button.  We were lucky that time.  You know corporate doesn’t like to pay for messed up copies.  It’s not just the refunds; it’s the upset customers too.”

“Yeah, fine.  Check the goop.  Got it.”  Ben headed back to the counter.  The rest of the day was busy and closing time came around quicker than he expected.

Ben went to the machine and started to clear the goop trays and sort them in storage.  Tissue, blood, bone, organ, muscles, connective goop, every type of goop needed all fit into a series of canisters that he had to clean every night.

Jones helped tonight, though Ben wasn’t happy about that as he expected more criticism for today’s mistake.

Ben looked over at the unusually quiet Jones.  “That guy, George.  It says he works as a manufacturing engineer.”

“Yeah, so?”  Jones was cleaning out the blood tubes with sanitizer.

“Well, when we make copies, the people walk out young, strong, all new.  But they always have the same jobs, the same memories and skills.  Why not upgrade to something more exciting?”

Jones considered that for awhile.  “I suppose that every job needs doing and if we all wanted to have exciting jobs; there would be no manufacturing engineers.”

Ben banged the pans into their storage, eliciting a frown from Jones.  “It’s just not fair is all.  When I get old and get copied, why the hell do I have to come back here and be a damn clerk at a copy store, working for a dumbass like you?”  Ben braced himself for a barrage of yelling, but nothing happened.

Jones looked at his missing arm, where only a stump rested under Ben’s shirt.

Ben saw the direction of his eyes.  “So it’s because I only have one arm?  Why can’t I get a new arm?  Copy shop software would fix that.  Just add in more goop.”

“It’s not that simple Ben, like I said; they need people to do crap jobs like this.”

“Then how did you get here Jones?  Why are you stuck as a lowly Assistant Manager at a You-Copy?  You’re not much better off than me.”

Jones sat down heavily.  A single tear ran down his cheek and his lips trembled.  “I’m sorry Ben.”

Ben felt a growing dread, hollowness deep in his chest.  “Sorry for what?”

“I’m here because I didn’t check the goop before I hit start.  I didn’t put enough in.”  Jones pointed at Ben’s missing arm.  “You were a baseball pitcher before.  It was an exciting job, and others wanted it.  When I forgot the goop, well, there wasn’t a clean image left and others were in line.”

“You bastard!  You dumb bastard!  That’s why I’m here, because you screwed up?”

“Yeah.”  Jones stood trembling.  “And I’m here because I was a doctor, and someone messed up my copy too.  That’s why people don’t ever get better jobs Ben.  We’re all mistakes made by people in a hurry.”

Visions of the Future Anthology

Submissions Needed, 5,000 words or less, only futuristic themes.  Short stories, flash fiction and poetry are all welcome.  Paint your picture of a dsytopic, utopic or otherwise unique vision of the future.  WORD format preferred, only electronic submissions accepted.  Submission is FREE and you can submit multiple entries if you wish.

Submissions required by December 15, 2013.  Expected publication prior to May 2014 both in print and published in Kindle format. 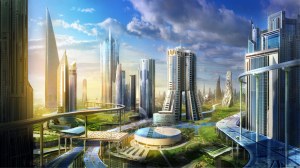 Please send inquiries and submissions to:

For the subject put:  Anthology Submission

Selected authors will receive two free printed copies of the final anthology and will be able to purchase unlimited print versions at cost.  All other sales will be retained by Eiverness Consulting Group, Ltd.