John Hobbis Harris was a Christian missionary that traveled to the Belgian Congo.  His wife was an amateur photographer in this new technology of taking pictures.  Her name is Alice Seeley.  Their story is one of courage to document and fight against horrible atrocities along side such figures as William Sheppard, a black American Christian missionary,  E.V. Sjöblom, a Swedish Baptist minister, George Washington Williams, a black American minister who had fought in the US Civil War, and even Mark Twain (Samuel Clemens).  It was the photographs taken by Harris and his wife Alice Seeley that won over the public. 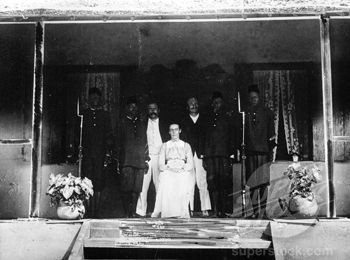 Alice Seeley seated. Her husband standing to her left. Not only did their photos change Belgian Congo, but the world. Their mission also provided healthcare and shelter to dismembered slaves.

King Leopold II of Belgium, like so many European monarchs in the 1800’s, had established various colonies around the world.  By the late nineteenth century, most of the world had been colonized from South America to Africa, Asia and the Pacific Islands.  Belgium had a substantial colony in the Congo.  The Congo had two products that were in high demand – ivory and rubber.  There was no modern media such as TV or radio, much less the internet.  Most colonial powers could do as they pleased and no one be the wiser.

Following the American Civil War, abolitionists from America went to other areas where slavery was practiced to expose it and abolish it.  American protestant missionaries were in the forefront of this movement, often suffering death as a result.  In the Belgian Congo, the local populace was beaten, enslaved and mutilated to keep up the rubber plantations and bring in revenues for Belgium, while the indigenous animals were slaughtered.  Several newspapers, brochures and pamphlets were used to try to stop the practice, but it was these pictures that caused King Leopold II to finally stop the worst of the atrocities.

WARNING:  These images are graphic.  Not only were slaves beaten or killed, but the Belgium leaders would chop off arms and legs as punishment.

Local Congolese King Kuba. Their own tribal chiefs prospered by offering their tribe members as slaves

Punishment in the sun

Tools of the rubber trade. You had to poke holes in the plants then tap the sap

A Belgie proud to be photographed with the slave he mutilated