Once again these are some cosplay pictures from my extensive catalog.  Cosplay = costume play.  It can be people dressing up as comic book characters, TV, Movies, pop culture, manga, anime, horror, zombies, or even just their own original costumes.  Remember how much you liked dressing up as a kid for Halloween?  Well, cosplay is like that but for adults.  If you want steampunk cosplay, I show that under a different post called steampunk aircrew.  I also do not post fetish, furries, or other such photos that are about sex and not about the fun of dressing up and playing a persona.  Enjoy!

Surprising how many cosplayers stick out their tongue, pick their nose, or other silly things for photos

Wonder Woman as Princess Diana of the Amazons

This is commitment to cosplay. I can only imagine how long this outfit took to make.

Toni Darling as Halibel. Several fanboys became fanmen when they saw her. 🙂

Storm with Wolverine in the background

Friends and fun – the cosplay life

This is the line to get into Phoenix Comic Con 2013 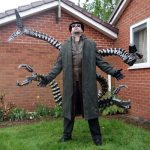 “You wanted me in the kitchen?” Never demean a woman warrior…

Next generation cosplay – Batman and Robin