Blood Bank is an adventure that takes place in a post-apocalyptic world with the strange start of a clerk who tracks blood for the controlling monsters.  My beta readers say it’s the best book I’ve written so far.  Your patronage is MUCH appreciated, as are any reviews posted to Amazon.  (Pardon my gratuitous begging…)

Here is the cover, illustrated by Alfred Trujillo and Cara Nicole at 183 Degrees studios.  Thanks to my publisher at Arizona Publishing Services, LLC.  There is also an alternative cover with Cara Nicole as the character Shawna which will be available on Kindle and at special convention events. 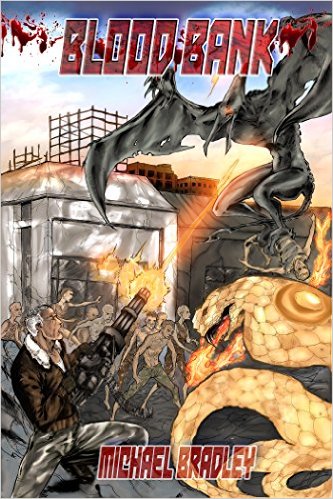 Here is the Amazon link to purchase:

Here is a brief description off the back cover:  William believes he is the only non-bitten human left in the world. He spent his entire life raised by vampires to run their blood bank and keep track of deposits and withdrawals. One day, young Shawna, a human who grew up in the wild is dropped into his prison for companionship. Neither William nor Shawna really understand the world in which they live and they both become unwitting pawns in a final power play by their vampire Overlords.

I really appreciate all of you who come to this blog site for some fun and interesting reading.  I am now up to 468 followers on my blog and if you throw in the twitter feed @mbtimetraveler, linkedin, FB, pinterest, etc., up to around 4,000.  Every one of you are awesome!  Thanks for the support, you reading the posts makes it fun for me to put them on here.  If you think this is an enjoyable blog, please recommend it to others so we can reach that 500 blog followers mark.

Also, if you ever want some longer reading, feel free to visit my store for links to my books.  I just finished the first draft of my fifth book, Blood Bank.  I am rewriting it and then it goes to the agents/publishers for consideration.  Wish me luck!

Here are some early concept covers courtesy of the lovely Cara Nicole (AZ Powergirl) posing as the heroine of the story, Shawna.  At the beginning she is dropped naked into the Blood Bank and has nothing to defend herself but her fierce spirit and a screwdriver.  Photography and design by Alfred Trujillo: 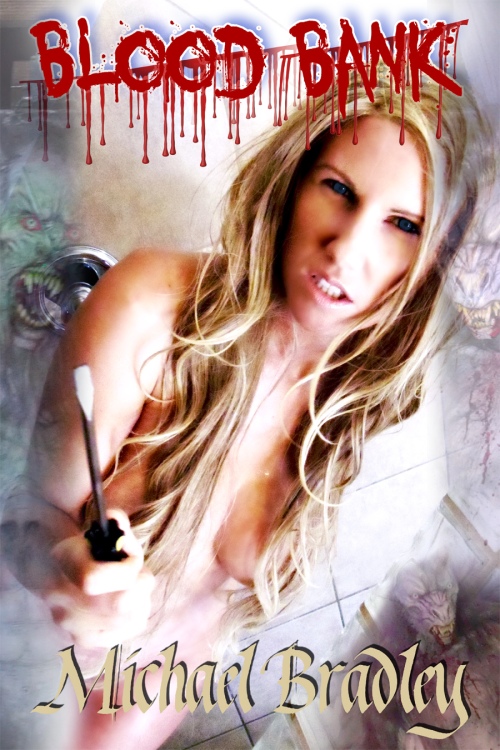 I came across this very cool site on StumbleUpon called, I Write Like:

You put a chapter of a book you wrote/are writing, or a short story, or an article in the provided box.  It then tells you who the writing is similar to.  I can’t attest to its accuracy, but I found it pretty fun.

Hop To It, One of my shorts in Twisted History – Chuck Palahniuk

So, I guess it is true I write in a different style whether writing horror, steampunk, or humorous history.

What results will you have?

Why Nerd Conventions are Full

As a nerd myself, I am proud of my vast reading, viewing and gaming history.  I have played hundreds of video games, including Massively Multi-player Online Role Playing Games (MMORPGs) like Everquest, EQ2, Star Wars Galaxies, Dark Age of Camelot, World of Warcraft, etc.  I have been and am, Guild Leader, officer, organizer of several.  In First Person Shooters (FPS) I have also been in clans and player associations, often ranking in the top 5 out of 500,000 players world-wide.  I have a comic book collection, I have every star wars and forgotten realms books ever published.  I was a Dungeon Master for D&D and played wargames before that, going back to the original Chainmail rules, and boxed sets.  I read Lord of The Rings in the first grade.  I made my own first computer and programmed on a cassette tape deck with a Commodore 20.  At one point, I held world records for Space Invaders, Robotron, and and Battletank.  I could go on, but let it suffice to say that I have been, and always will be, a super nerd.

Oddly enough, my first actual convention was in 2010, at Phoenix ComicCon.  As a child I wanted to go to GenCon in the worst way, but I was too poor.  As an adult, I had a wife, kids, and very demanding jobs.  I finally decided to go in March of 2010.  I was very nervous, being 47 at the time, that I would be the old man wondering around looking stupid, that I would not know how to do anything, that all my gaming knowledge was archaic.  Instead, after my initial nervousness, and having my at the time normal, non-nerd wife go, we had a blast.  Films, fun, games, great guests, great vendors, costumes and great people abounded.  My wife had more fun than I, starting her perilous descent into my world of imagination, fantasy and sci-fi.  She dressed up as an original crewman from Star Trek, and was hit on by people while I was standing protectively near her.  I will have to scan the picture and post of her and Lou Ferigno.  John Schneider got cozy with her, the kid who played Boba Fett in Star Wars was grown up, early 20s and asking her out – in front of me…  Almost had to take down the bounty hunter…

The point is, outsiders view conventions as a bunch of geeks and nerds doing stupid things, even today.  In fact, they are awesome fun.  The other thing that outsiders do not realize is the existence of “cosplayers.”  Cosplay is short for costume players.  It ranges from dressing up in a costume but not on Halloween, to entire lifestyles of dress and counter-culture.  This has spawned the existence of the dream girl for male nerds.  The geekgirl, the cyberchick, the cosplayer, the nerdgirl…  Lots of terms, but none do justice to these new mega-stars of the convention scene.  You might not know them, but they have hundreds of thousands of fans and are well known names among us science fiction fans.

Here are some examples of why young guys flock to conventions, other than the science fiction:

Leelo from the Fifth Element

This IS the Droid they are Looking For…

Psyloche, my favorite X-Men Character, but not in the movies…

I believe this is Paris Sinclair, forgive me if I am wrong

Cara Nicole, Arizona Powergirl. On the Cover of Twisted History, and Upcoming “Blood Bank” novel by yours truly

Jessica Nigri, made Picachu attractive, which no one thought possible

Photos Taken for “Blood Bank” Due Out in December!

I want to thank Cara Nicole and Alfred T-Virus Trujillo for shooting photos for my fourth book, due out this December, entitled “Blood Bank.” It is a post apocalyptic vampire run Earth that examines what it means to be human, and that monsters should be careful what they ask for. And no, there are no “sparkly” angst ridden vampires in it. After the photos are processed and approved, we will be sharing some teasers, leading up to the release date.

Cara played a vampire on the cover of Twisted History, my second publication, which includes stories from several local up and coming authors.  This time Cara will be playing a human, named Shawna, upon whose head the fate of humanity rests.  This is the first in a three part trilogy, but each book will also stand alone.

Here is Cara on Twisted History: